A scan of this morning’s best and worst performers via the Strong/Weak app shows that the recent swell of generally improved European manufacturing data has investors feeling less worried about a return of the dark days of the Euro-Zone debt crisis. How do we know this? The few traders back at their desks for the short first week of 2014 are selling the Swiss Franc on the day, the regional safe haven that proved so popular in 2011 that the Swiss National Bank had to impose a floor against the Euro to stem capital flows.

As Japanese Yen weakness and weakness in precious metals signal a return to more normal economic conditions – markets ruled less by fear of a return to the depths of 2008 – continued weakness in the Swiss Franc suggests that risk-aversion is dissipating in the European FX space. Accordingly, as the GBPCHF is the top performer on a rolling 24-hour period, we view the recent pullback over the past few hours (as observed on m15, H1, and H4 timeframes) as a potential opportunity to position long for a break higher. 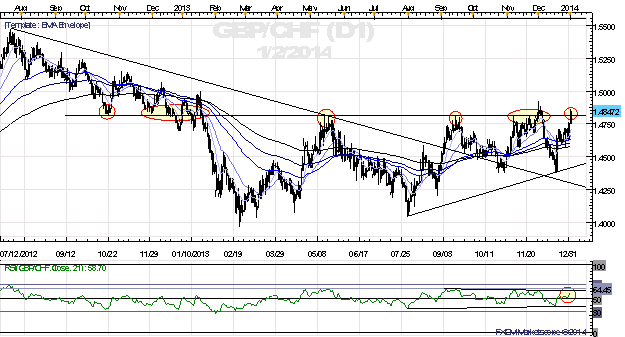 - The recent tests of 1.4800/20 have occurred after price has maintained the break of the descending trendline off of the July 2012 and May 2013 highs.

- The daily RSI (21) recently held 50 on the consolidation/pullback, suggesting that bullish appetite remains. 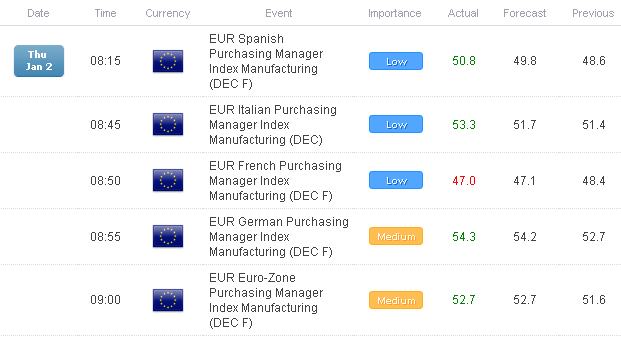 There are no data on the Swiss Franc economic calendar for Thursday, January 02, 2014.