- Aussie rebounding after mixed jobs report (jobs up, but so is Unemployment Rate).

- Worst Euro-Zone Industrial Production data in a year buttresses worries that growth is stalling again in the region.

A scan of this morning’s best and worst performers via the Strong/Weak app shows that while the Australian Dollar is the worst cumulative performer on the day (rolling 24-hour basis), the Euro has hit the skids since the pre-European hours. Indeed, after an ECB policy official suggested that further accommodation could be coming if economic conditions remain stagnant or worsen in the near-term, the recently resilient Euro relented.

While this may have spurred some light speculation that another LTRO was on the way, ECB President Draghi was quick to clarify the issue. In a speech today, Mr. Draghi noted that any new LTRO must be geared towards helping the real economy.

As we’ve been discussing since October 3, we believe that the relative success of the Bank of England’s Funding-for-Lending Scheme (FLS) represents the likeliest outcome for a new program by the ECB. This would fit with Mr. Draghi’s desire not to give banks a carte blanche liquidity injection.

Considering that the ECB’s balance sheet has declined by -24.4% in the 52-weeks ending November 22, 2013, there is little room left to wonder why the Euro has been able to sustain an elevated exchange rate this year. If further accommodation on the December 2011/February 2012 LTRO scale is unlikely, the Euro may have further room to appreciate going forward. Today we examine progress in EURAUD. 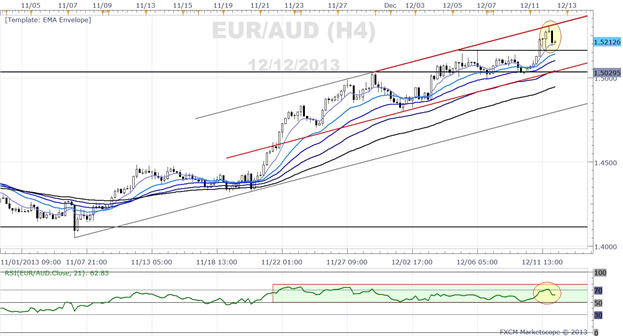 - The EURAUD has been in an accelerated ascending channel since November 21, climbing from near A$1.4500 to as a fresh yearly high of 1.5306 today.

- On the H4 timeframe, it appears that an Evening Star candle cluster (bearish reversal pattern) may be forming.

- The steepest advance of the EURAUD move would be considered finished on a move below 1.5030 this week.

There are no data on the British Pound economic calendar for Thursday, December 12, 2013.