- No data of real significance out in Europe today.

- No data of real significance out in North America today.

A scan of this morning’s best and worst performers via the Strong/Weak app shows that countertrend moves are afoot in the JPY-crosses as the Nikkei 225 has turned lower the past few days. The Yen’s rally has also been boosted by a decline in US Treasury yields. Nevertheless, when we see that today’s weakest performer is the GBPJPY, one cannot ignore the temptation to ‘buy the dip’ in context of longer-term price action.

Indeed, from the start of July through the end of last week, GBPJPY had appreciated the most among any major currency pairings, up by +10.36%. Although the pair was down by just over -0.10% at the time of writing, it was down nearly -1.20% from its weekly peak just above ¥170.00.

After having taken a look at GBPJPY from the long side on Friday (the entry remains approximately 100-pips below current price), it may be nearing the time to add in to this trade: 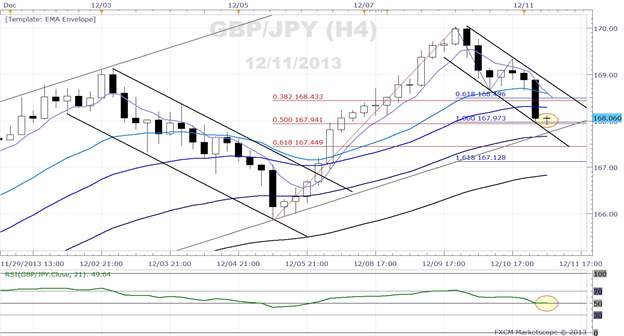 - The GBPJPY has hit a new yearly high at ¥170.05 earlier this week, but has been engaged in a descending channel since then.

- In the broader picture, GBPJPY remains in the steep uptrend relative to the November 13 and December 5 lows.

- RSI (21) on the H4 timeframe is steadying near 50, the demarcation for bullish/bearish momentum. It’s worth noting that the last time RSI (21) was below 50 (last Friday), price was over 100-pips lower.

- A Doji forming on the H4 candle after another significant down bar could be a sign of weak hands capitulating; indeed, last week’s low culminated in one final wave of selling pressure.

- Price reestablishing itself above 168.50 would suggest the correction is over; a break below 167.55 (55-EMA on H4, uptrend support from November 13 and December 5 lows) would suggest a top may be in place.

There are no data on the British Pound economic calendar for Wednesday, December 11, 2013.

There are no data on the Swiss Franc economic calendar for Wednesday, December 11, 2013.