A scan of this morning’s best and worst performers via the Strong/Weak app shows that the Euro has emerged as the top performer on the day (rolling 24-hour basis) against the Japanese Yen, although it is the British Pound that has seen a surge in momentum the past several hours.

The Sterling’s rebound comes on the back of a higher than anticipated inflation expectation reading. The Bank of England has been working to keep interest rates low as it normalizes its policy vis-à-vis forward guidance, so the surge in 12-month inflation expectations comes as a surprise to market participants. Higher rates of inflation theoretically provoke tighter monetary policy; and the British Pound is reacting in kind.

The past several days have produced a modest three-figure pullback in the GBPJPY, coinciding with a decline in US and Japanese equity markets (to which the Yen is sensitive to). The Yen component has also proven sensitive to US yields in months past; higher US yields infer the Federal Reserve will taper QE3, and therefore the Yen’s role as an alternative to the US Dollar is diminished. We thus turn our attention to short-term GBPJPY charts for possible trade setups on NFP Friday: 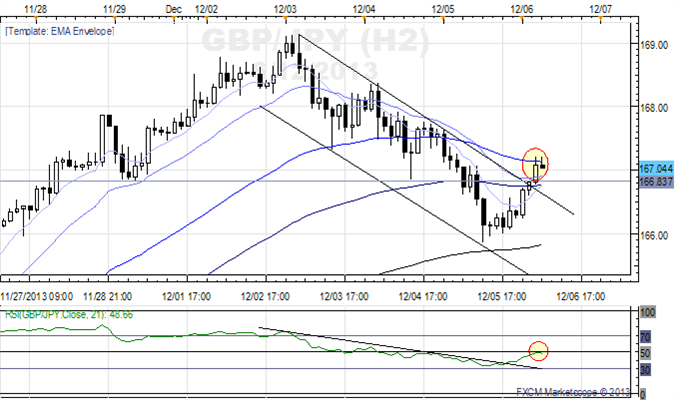 - The GBPJPY has emerged from its descending channel off of the December 2 and 4 highs, clearing former support at ¥166.84.

- RSI (21) has also broken out of its downtrend, but has yet to clear 50, the demarcation between a bullish and bearish momentum bias.