A scan of this morning’s best and worst performers via the Strong/Weak app shows that the British Pound is having a strong day once again, although its gains have differentiated from last week. Whereas the commodity currencies has suffered versus the Sterling, the worst two performers on the day are the Euro and the Japanese Yen.

Considering that the Yen has been one of the weaker major currencies the past several weeks, the divergence between the British Pound and the Euro is more enticing. Accordingly, with the Euro as the worst performing currency on the H1, H4, and D1 rolling timeframes, it appears that EURGBP may be getting ready to lurch lower: 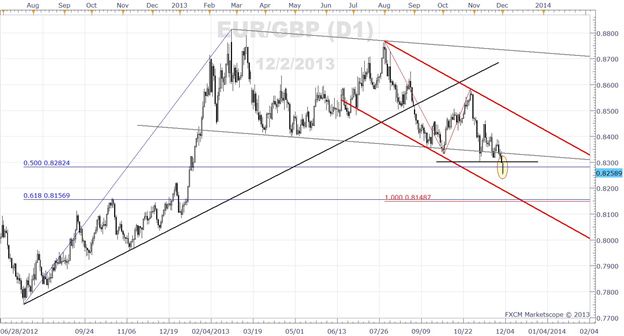 With the EURGBP breaking down through £0.8300 today, there may be a bigger push lower developing over the coming weeks.

- A close below 0.8282/3000 would confirm the descending channel off of the July and October 2013 highs (with the parallel drawn to the September low).