A scan of this morning’s best and worst performers via the Strong/Weak app shows that the selloff in the commodity currency bloc has restarted. This was a major theme from last week, and the European currencies benefited from lack of clarity out of the Federal Reserve; indeed, the Euro’s performance versus the Australian and New Zealand Dollars has eclipsed that of the US Dollar.

With significant economic event risk on the horizon for the United States – the November confidence reading – it is likely that USD pairs see additional volatility. Accordingly, while the momentum profile of the Australian Dollar is becoming increasingly bearish versus the Euro and the US Dollar, the EURAUD may present a better opportunity than AUDUSD over the next several hours. 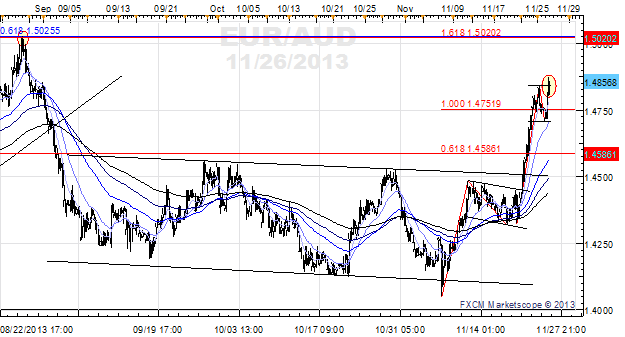 - The initial EURAUD long examined last week from A$1.4510 remains in play.

- The pause yesterday set up another flag on H1/H4 timeframes, and the new Fibonacci relationship sees an initial target at 1.5026 (blue 61.8% extension).

- Conflux of targets at 1.5020/26 too coincidental to ignore; will take profit and close entire positions there.

Here’s a look at the upcoming data out of the United States: