- Both EUR and GBP benefiting from speculation central banks on hold for next few months.

A scan of this morning’s best and worst performers via the Strong/Weak app shows that all three commodity currencies – the Australian, Canadian, and New Zealand Dollars – are the worst performers over the past rolling 24-hour period. This theme has been developing since the end of the US session on Wednesday as a result of the Federal Reserve’s October meeting Minutes.

Yesterday, we discussed the potential for a breakout higher in EURAUD. Today, our focus turns to GBPCAD, the second-strongest GBP-cross on Friday. While the Australian and New Zealand Dollars are losing ground more quickly, Friday’s trading conditions will present more liquidity in the Canadian Dollar than its commodity bloc counterparts (those markets will have been closed for the week); and with significant event risk on the docket for Canada, heightened volatility should be expected. 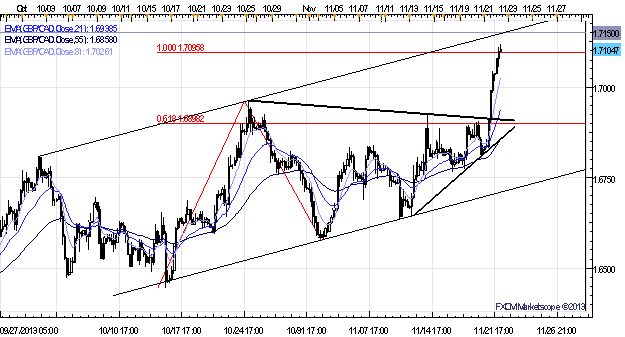 - The GBPCAD remains in an uptrend since late-September.

- The recent breakout from the triangle formed against the October highs has already achieved the 100% extension target of C$1.7096.

- While the move higher in the near-term may be reaching overbought conditions on various indicators (Slow Stochastics (5,3,3), RSI (21)) on lower timeframes (H1, H4), channel resistance is not in play until 1.7150/70 today.

- With momentum firmly to the upside – from m15 to H4, full bullish time frame continuity exists (8-EMA>21-EMA>55-EMA) – this morning’s incoming Canadian data could spur the continuation higher into the final channel target of 1.7150/70 for Friday. 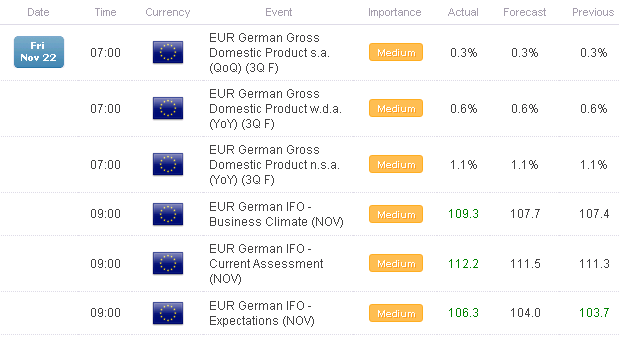 There are no data on the British Pound economic calendar for Friday, November 22, 2013.

There are no data on the Swiss Franc economic calendar for Friday, November 22, 2013.