- European currencies under pressure since beginning of trading session.

A scan of this morning’s best and worst performers via the Strong/Weak app shows that the New Zealand Dollar is the big underperformer on the day, with the Australian Dollar and Japanese Yen only posting modest gains. The appreciation by the commodity currencies in general has accelerated over the past seveal hours at the expense of the European currencies, which are among the worst performers over the past rolling H4 period.

With a raft of important Euro-Zone data out this morning – including a downgraded OECD growth forecast for next year – the Euro finds itself continuing its battle for $1.3500 against the US Dollar. Evidence of the Euro losing momentum as the pair runs into key resistance offers clear risk for any trades taken. 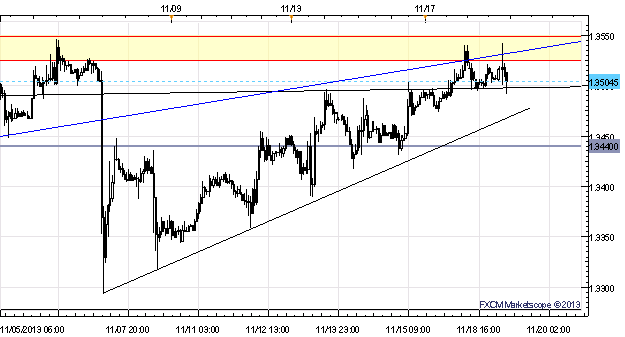 - The EURUSD continues to hold above former key support, 1.3440 (grey line on chart above).

- The TL off of the June and August highs serves as former resistance turned support and vice-versa at 1.3500 (black line), and price continues to hold above it the past 24-hours.

- A daily close above the ascending TL off of the July and September lows (blue line) at 1.3525/50 would be required to switch bias from “rebound” to “emerging trend.”

There are no data on the British Pound economic calendar on Tuesday, November 19, 2013.

There are no data on the Swiss Franc economic calendar on Tuesday, November 19, 2013.