- EURGBP plummets towards critical support ahead of ECB on Thursday.

A scan of this morning’s best and worst performers via the Strong/Weak app shows that yesterday’s Dollar strength hasn’t carried over into Wednesday, although outside of a few select currencies, price action can be described as quiet at best.

However, over the past several hours, certainly for the entirety of the European trading session thus far, activity has picked up in the EURGBP cross in particular, after several “medium” importance data reports were released favoring the Sterling over the common Euro-Zone currency on a fundamental basis.

Accordingly, with the EURGBP sliding towards critical support ahead of the European Central Bank meeting on Thursday, our attention turns to the pair this morning. 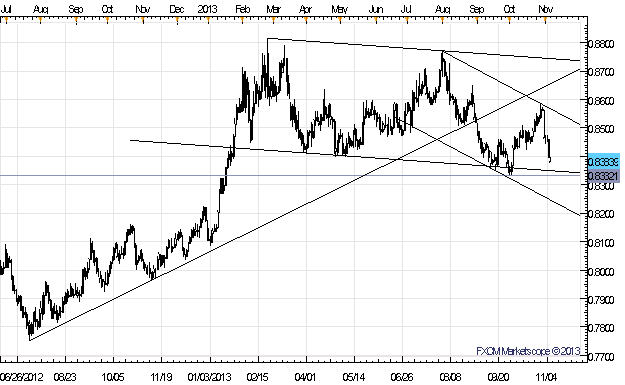 The EURGBP has traded in a sideways channel between £0.8330 and 0.8815 since January 2013, but after breaking the uptrend off of the July and September 2012 lows on August this year , price has started to act in a more bearish manner. A downtrend has emerged off of the August 1 and October 29 highs, drawn to the September 13 low.

The shorter-term descending channel in context of the longer-term bullish trend break in August suggests further downside; but the short-term bearish trend is in contradiction with the more interemediate, neutral, sideways channel held since January. Accordingly, ahead of the ECB meeting on Thursday, we see that the EURGBP is riding short-term momentum into support that could dictate whether or not the consolidation seen since January will persist.

With the ECB expected to be a particularly market moving event given the expectations built into it, the upcoming 0.8330/50 support region will be difficult crack before tomorrow. That being said, if price were to trade into the region ahead of the meeting, it would be beneficial to look both long and short:

- a break through 0.8330 on the back of dovish policy actions could propel the EURGBP towards 0.8200 over the coming days;

- or inaction on the ECB’s behalf could help the pair recove towards short-term trend resistance near 0.8525/50.

Modest revisions to various Euro-area PMIs helped lift the Euro earlier versus the safe haven currencies (CHF, JPY, USD), but the weak September Euro-Zone Retail Sales data has changed the tone this morning. Weaker than expected consumption confirms fears generated by last week’s dismal inflation reading that kickstarted the recent Euro breakdown; and expectations around tomorrow’s ECB meeting are inevitably building. Both the policy statement and the press conference will be critical to take note of.

The September and October PMI surveys suggested that UK production would continue its trend higher through the end of the 3Q’13, and those views were vindicated today after the release of the official Industrial and Manufacturing Prodution reports for September. The British Pound has benefited from the recent reinvigorated data, and should continue to do so ahead of tomorrow’s Bank of England meeting that is expected to be anything but dovish in nature.

There are no data on the Swiss Franc economic calendar on Wednesday, November 06, 2013.