A look at the Strong/Weak app shows that the British Pound is the overall top performer on the day, but in the near-term (m15, H1), various JPY-crosses have started to weaken. Accordingly, we see GBPJPY as a viable scalping candidate over the coming hours given how price action fits within the recent trading range. 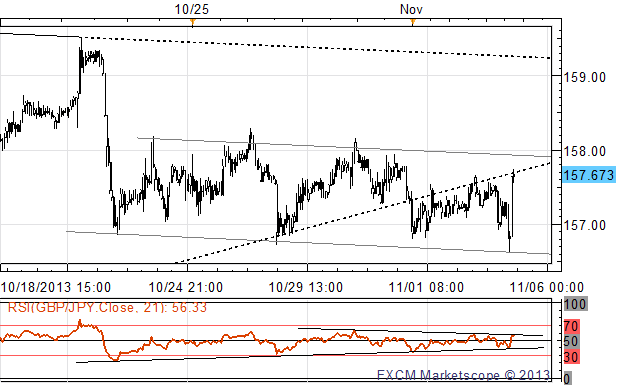 The GBPJPY has rebounded off of range channel support near ¥156.50/60, rocketing to just short of resistance of an exceptionally strong UK PMI Services report this morning (discussed below).

Yet the rally has stalled, running into two forms of resistance. First, the former supporting TL off of the August and October lows at 157.70; and second, resistance in the H1 RSI (21) congestion pattern that’s coincided with the price range dating back to October 23.

While the range could very well hold – a break to the upside will need to see price retake 158.30 at minimum. A breakdown would occur under 156.50. A break in either direction of the H1 RSI (21) – currently pressing to the upside – could hint at an increasing probability of a move in the same direction.

The European Commission’s report on the next year’s worth of key economic milestones was dour as expected, in light of last week’s discouraging inflation report. Accordingly, with Euro-area growth expected to come in at +1.1% in 2014 (versus +1.2% prior) and inflation at +1.5% (versus +1.8% prior), there’s growing evidence for the European Central Bank to at least signal dovish intentions at its policy meeting this week. Ultimately, it is likely that the Euro is one of the more active currencies on the week with significant event risk backloaded into Thursday and Friday.

The UK services sector continues to grow at a torrid pace, with the October PMI Non-Manufacturing index coming in at 62.5, the highest rate in 17 years. This follows the best quarterly performance in 16 years in the 3Q’13. No doubt, the Bank of England’s Funding for Lending Scheme is paying dividends here, with the components of the report showing signs that the labor market may be reaching a saturation point – that is, wages will have to rise or job growth will develop to compensate for the additional production needs. The British Pound’s surge across the board following the release is warranted in light of the data.

Read more: Dip versus EUR, GBP May Be chance to Buy as USD Retreats after Breakout