Pound Joins Euro Slide, Drops against US Dollar - $1.6000 in Question

- The single Euro-Zone currency was the worst daily performer again.

- Cable at significant support, otherwise Double Top in play towards $1.5600.

A look at the Strong/Weak app shows that while the EURUSD has been one of the worst performing currency pair over the past rolling 24-hour period (D1) once again, it’s the GBPUSD that’s been underperforming more noticably on the short-term timeframes (m15, H1) after this morning’s data. Now, a more significant technical breakdown may be beginning. 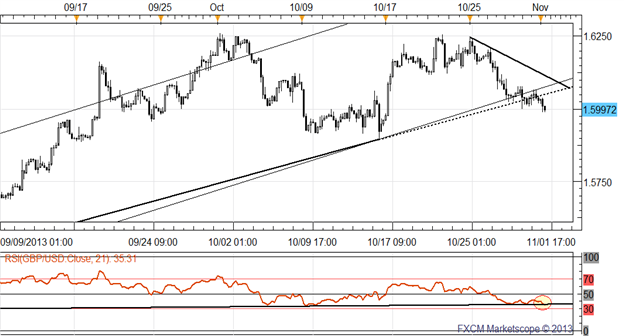 If a bounce were to materialize, this would be the area for the GBPUSD, having seen consolidation occur between October 9 through 17, from 1.5925 to 1.6000; demand has proven strong enough here to absorb modest selling as the pair faded from near the yearly high (1.6342 on January 2, first trading day of 2013).

There is no data on the Euro economic calendar for Friday, November 1, 2013.

The UK manufacturing sector continues to grow at an impressive rate relative to other developed economies, although the slightest sign that expansion may be occurring at a more modest pace has provoked weakness in the British Pound today.

Even as the UK economy exhibits resiliency, it’s worth noting that the Citi Economic Surprise Index has fallen to 20.50 today from a high of 113.30 on August 19; data has lost its luster relative to expectations, undercutting fundamental momentum supporting the British Pound.

While the GBPUSD is exposed to a more concerted technical pullback (as suggested above), the UK economy’s resilience should help keep the British Pound supported elsewhere (against the Euro, the Swiss Franc.)

Accordingly, a GBPUSD turnaround, while aided by modestly weaker UK economic data, will really need to find fuel in the USD component; higher US yields if QE3 expectations realign for a December Federal Reserve taper of QE3 would help, for instance.

Read more: US Dollar: Next Leg of Collapse Rests in FOMC’s Hands