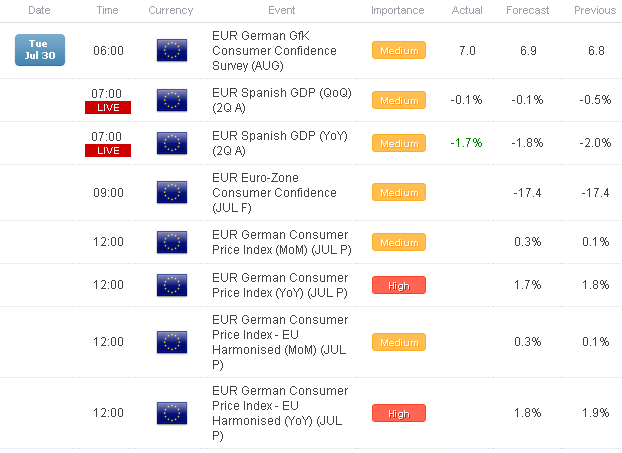 The Spanish GDP (2Q A) report kicked off the day on a positive note, with the yearly figure beating expectations by one-tenth of a percent but the Euro has only seen a mild reaction thus far.

Nevertheless, given the uptick in peripheral Euro-Zone data the past few weeks, a miss here would have had bigger consequences to the downside than what is being seen on a beat to the upside.

With the ECB meeting on Thursday, the July German inflation data due out today stands to be of importance as well, considering that Germany has been an opponent to further monetary easing by the ECB.

The uptick in short-term inflation (m/m) gives hope that the region may be finding a bottom in growth. Although a moderation is expected on the yearly figures, these are unlikely to weigh materially on the Euro.

Although technically on Tuesday’s calendar, the British data due today, given its late schedule, will be released at the start of the Asian session on Wednesday. Nevertheless, the uptick in British data since late-May is expected to continue, with the GfK Consumer Confidence survey (JUL) forecasted to rise to -19, the highest level since October 2010.

While the print shouldn’t spur any excess volatility – nor should it spur a major bullish reaction by the British Pound – it will underscore and cement the recent uptrend of data, which at least insulates Sterling bulls’ confidence.

There are no data on the Swiss Franc economic calendar for Tuesday, July 30.

See the Swiss Franc economic calendar for the week of July 28 to August 2.