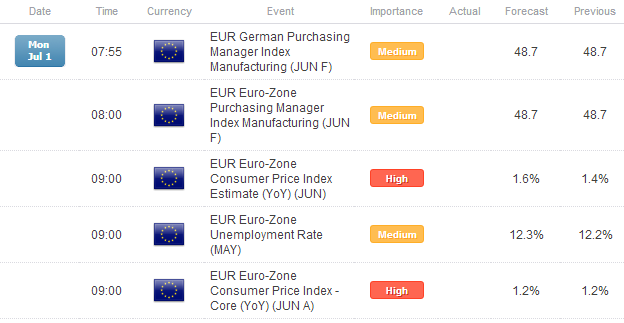 Final June German PMI revisions should be eyed as well as ‘low’ ranked Italian and French PMI data, but the big focus will be on the broader Euro-Zone releases at 05:00 EDT/09:00 GMT. In particular, the Euro-Zone Unemployment Rate (MAY) should hit a new all-time high, while inflation data for June shouldn’t offer a strong indication of rebounding demand in the region. Any Euro strength derived from the headline prints (those expected) shouldn’t produce much of a bullish reaction.

The first of the three June PMI data is out today, with the PMI Manufacturing report expected to show a slight increase, but nothing that should prove to be a major boost to the British Pound. Similarly, the other data due today isn’t forecasted to overwhelm, but it should be noted that May PMI figures showed substantial improvement, signaling the potential for positive surprises on any May UK data.

Swiss data has been rather benign ever since the SNB implemented the Sf1.2000 floor for EURCHF, and the SVME-Purchasing Managers Index (JUN), even as a ‘medium’ importance release, is unlikely to have a major impact on the Swiss Franc. Mainly, this is due to exogenous volatility onset by more global themes that are driving price action in the safe haven currencies the past week.