- Top 2% Not Job Creators or Millionaires in Tax Debate – Bloomberg

Markets were relatively stable through the early part of the European session today, with high beta currencies and risk-correlated assets trading only slightly lower relative to safer assets by 06:00 EDT / 10:00 GMT today. However, it took only a small catalyst – the official approval of a €100 billion aid package for Spanish banks – to completely obliterate risk-appetite. Yes, on the official announcement of the Spanish bailout, markets fell, and they fell hard.

One needs to look no further than European credit and equity markets to see the carnage that took place in the second half of the European trading session. The final tallies for today across European stock markets:

The reaction we’re witnessing across the globe today, especially since the Euro-zone finance ministers officially announced the bailout deal this morning, offers insight into what we should expect (and have expected) going forward: it’s as simple as ‘buy the rumor, sell the news.’ In mid-June, the market got wind that Spain would be bailed out, which in reality is just another liquidity injection. Now that the liquidity injection is in the rearview mirror, and there’s no definite milestone to look forward to, risky assets have been dumped in favor of the Japanese Yen and the US Dollar. Without the promise of government or central bank intervention, market participants time and again have proven unable or unwilling to hold assets correlated to the European debt crisis; we thus believe, barring a major QE program from the Federal Reserve, EURUSD rallies should be sold.

The Japanese Yen is the top performer today, with the USDJPY falling 0.11 percent. The Euro is the worst performer, shedding 0.90 percent against the US Dollar. Similarly, the USDCHF has rallied 0.87 percent. The commodity currencies have held up relatively well, with the Australian, Canadian, and New Zealand Dollars posting losses of 0.48 percent, 0.45 percent, and 0.51 percent against the US Dollar, respectively. 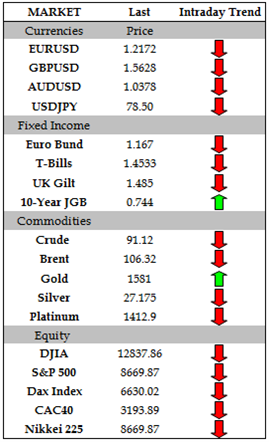 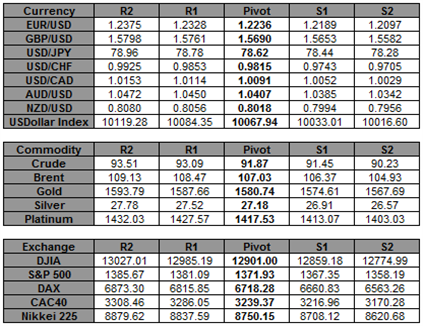