- Geithner Proposes LIBOR Changes to Bank of England in 2008 – Bloomberg

Surprising price action in the overnight as the second quarter Chinese growth figure came in worse than consensus estimates (7.6% annualized year-over-year, versus 7.7% y/y from 8.1% y/y in the first quarter), but high beta currencies and risk-correlated assets were largely unmoved. In fact, the AUSUSD was trading closer to its daily high, rather than its daily low, at the time was written; the Chinese GDP reading was rather unimportant. In consideration of recent data and chatter from the People’s Bank of China, we believe that it is very possible that investors have already begun pricing in another Chinese rate cut, which should be supportive of the Australian Dollar.

When considering the behavior of the commodity currencies in the wake of the poor growth reading, one needs to look no further than how the Euro has performed thus far on Friday to fully grasp the dire situation in Europe. Peripheral European credit has strengthened on the shorter-end of the curve (more on that below), which suggests that funding stresses are somewhat alleviated for the time being. And yet, the EURUSD has traded to a fresh 2012 low today, at 1.2161, at the time this report was written. UPDATE: the EURUSD has rebounded off of crucial 1.2160 support and was trading at 1.2244 at the time this report was updated.

Weighing on the Euro is the Italian downgrade set forth by Moody’s Investors Service, which dropped the Italian sovereign rating to ‘Baa2.’ The two-notch downgrade leaves scope for further cuts; but perhaps the most noteworthy piece (if only for superficial reasons) is that Italy now has the same credit rating as Brazil, Bulgaria, and Kazakhstan. If only looking at Bulgaria, which is seeking entrance to the Euro-zone in 2015, the country fails to meet two of the five criteria to join the Euro; and thus if it is considered of the same credit worthiness of Italy, I don’t think it is much of an exaggeration to say that perhaps that Italy shouldn’t belong in the Euro either (some have argued, included former Italian Prime Minister Silvio Berlusconi, that Italy should leave the Euro to regain a competitive edge using a devalued Lira).

Moving forward, despite some US Dollar weakness today, we expect the currency to strengthen in the near-term given widespread bearish sentiment for the currency among retail traders, while Federal Reserve Chairman Ben Bernanke is due to disappointment market participants at his Congressional testimonies next week.

The British Pound is the best performing currency today, with the GBPUSD appreciating by 0.84 percent on the session. The Australian Dollar is the next best performer, trading up 0.76 percent against the US Dollar. After setting new yearly lows, the EURUSD has since rebounded and is now up 0.33 percent. The USDJPY is largely unchanged, down a mere 0.13 percent as a positive risk landscape formed at the US open today. 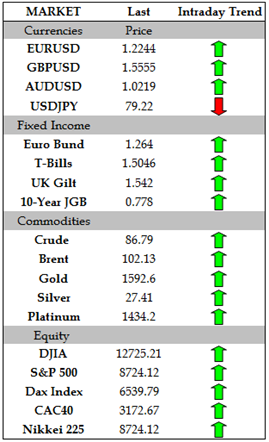 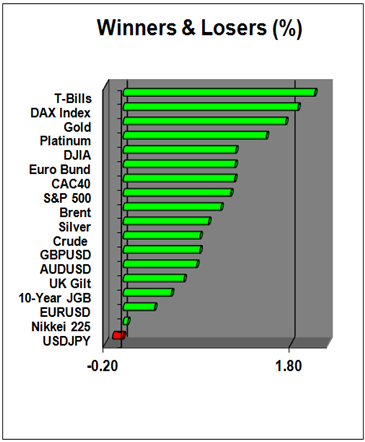 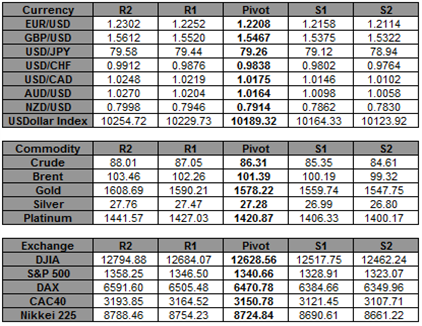