This is starting to look like a broken record. I don’t mean the Euro-zone crisis – that’s been on repeat for a while now. Instead, I mean how the markets take the efforts set forth by Euro-zone leaders to solve the crisis. October 2011, December 2011, February 2012, and June 2012 – they all looks the same: high beta currencies and risk-correlated assets are bid higher as Euro-zone leaders announce new measures, and within 24-hours, any momentum behind the rally has faded. And, just like the Spanish bailout from a few weeks ago, market participants are already drawing into question the viability of the recent measures.

Enter Finland and the Netherlands, who have been the catalysts behind the return of doubts over the Euro-zone Summit’s progress late last week. On Friday, it was announced that leaders had agreed that the European Financial Stability Facility (EFSF) and the European Stability Mechanism (ESM) would be used to help bring down peripheral yields, a welcomed development for the struggling European financial sector. Additionally, any seniority would be removed from the ESM, which was expected to attract private investors back to the Spanish bond markets.

However, the Finnish government said today that they, alongside the Netherlands, would block the ESM from buying bonds in the secondary markets. According to Reuters, “ESM bond buying from secondary markets would require unanimity and that seems unlikely because Finland and the Netherlands are against it.” Indeed, this has spooked the Euro, which was trading back under 1.2600 at the time this report was written, and was indeed the worst performing major currency on the session.

Looking ahead, the European Central Bank rate decision on Thursday should be an indicator of whether or not leaders have done enough to stem the crisis. If the ECB cuts rates or announces new measures to help quell fears, it thus believes politicians have done enough to warrant further help from monetary officials; if the ECB does not change its policies, then it is a sign that the ECB believes more needs to be done by political leaders.

The New Zealand Dollar is the top performer, gaining 0.29 percent against the US Dollar thus far on Monday. The Australian Dollar is also up, appreciating by 0.18 percent. The Euro has underperformed across the board, with the EURUSD falling by 0.55 percent. The British Pound and Canadian Dollar are mostly unchanged against the US Dollar, dropping by 0.06 percent and 0.01 percent, respectively. 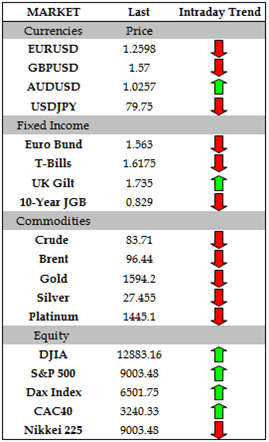 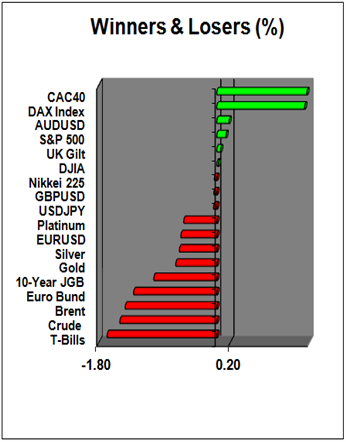 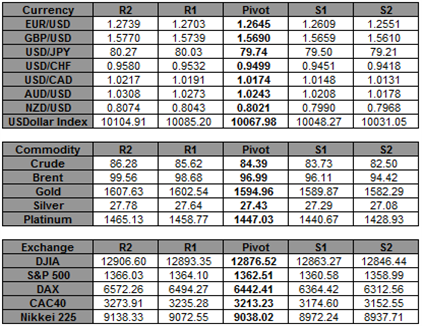