EURUSD Near Two-Week Low Ahead of Summit; GBP Weakest

- Wall Street Wins neither with Obama nor Romney amid Glare – Bloomberg

- Barclays Bosses Give Up Bonus after $452 Million Fine – Reuters

- Expanded Oil Drilling Helps US Wean Itself from Mideast – WSJ

Another light docket in Wednesday’s Asian and European sessions has left market participants rather quiet ahead of the Thursday-Friday Euro-zone Summit. Indeed, with a great deal of uncertainty surrounding Europe – will Spain need a bailout; will Greece need another bailout; what and when will the European Central Bank do something, anything – there exists some lingering hope that new measures may be introduced tomorrow. Although expectations aren’t high, the scant hope that something may be announced has help the majors consolidate against the US Dollar, even though the tables might be tipped slightly in the favor of risk-aversion thus far on Wednesday.

Going into the meeting, however, the pleas for help have already begun to filter in. Spanish Prime Minister Mariano Rajoy has continually called for joint Euro-bonds, but opposition has been high. German Chancellor Angela Merkel, perhaps the most powerful person in Europe right now, has said that joint bonds are the “wrong way” to achieve the necessary fiscal integration of Europe, further emphasizing that they are “wrong and counterproductive.” Adding to this negative rhetoric, German Finance Minister Wolfgang Schaeuble spoke this morning about German Bund yields (which are sitting near all-time lows), saying that the “unnaturally” low yields are more of a sign of fear among market participants rather than a reflection of the strength of the German economy.

Staying in continental Europe, Italy held another disappointing bond auction today, selling 185-day bills at an average yield of 2.957%, substantially higher than the 2.104% fetched in late-May. Yields have been on the rise in Europe again; and the 5-year and 10-year Italian auctions tomorrow are unlikely to show any signs of improvement. Alongside rising Italian (and Spanish) yields, the EURUSD has fallen towards its lowest level in two-weeks.

Moving across the channel, data in the United Kingdom has weighed on the British Pound, the worst performer on the day. Mortgage Approvals dropped in May to their lowest level in a year, further adding to the notion that the Bank of England will be forced to ease more in the coming months. Meanwhile, Prime Minister David Cameron said Euro-zone governments need to do more to “settle the financial instability” plaguing global financial markets.

The Australian Dollar has been the top performer today, with the AUDUSD rising by 0.09 percent. The British Pound has been the worst performing, depreciating by 0.53 percent against the US Dollar. The Japanese Yen has rebounded a bit, trailing the US Dollar by 0.18 percent. The EURUSD is holding near two-week lows, trading some 0.23 percent lower on the day. 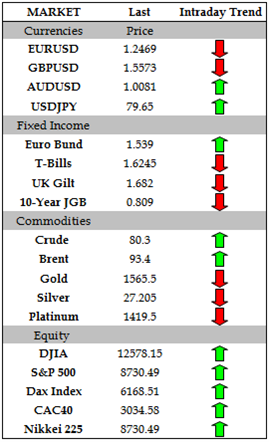 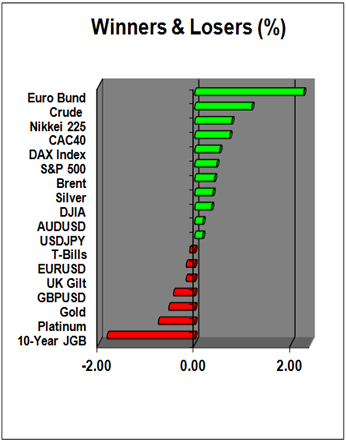 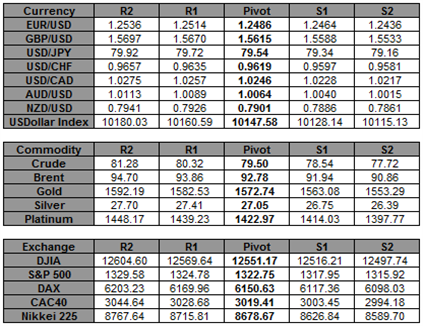