Despite a quizzically strong rally into the US cash equity session close on Friday, it appears that a bout of asset reallocation in the Asian and European sessions has sent risk-appetite plunging on Monday. As what has become typical of the volleying of demands between German and non-German European leaders, conflicting comments about sharing Euro-zone debt have rattled investor sentiment ahead of the US cash equity open.

Spanish Prime Minister Mariano Rajoy, no doubt under pressure to save his country’s struggling banking sector – one that is inextricably tied to the performance of government debt – continued to preach the claim that a supranational European fiscal authority would be necessary going forward. Prime Minister Rajoy also called for joint Euro-area bonds, perhaps the biggest sticking point between the European core and the periphery in recent months.

But as expected, German Chancellor Angela Merkel has put her foot down to quell any hopes of Euro-area bonds arising any time in the near-future. Chancellor Merkel said that issuing shared Euro-area debt would be just “counterproductive” now, while further reaffirming Germany’s rejection of joint Euro-area bonds, Euro-area bills, and Euro-area joint deposit insurance.

(Also of note: Spanish Prime Minister Rajoy also said that the Spanish bailout aids requested would cover any losses in the event of a negative surprise. The independent auditing firm, Oliver Wyman, suggested that some €60-70 billion would be needed in a negative outcome. However, in a tail-risk scenario – the very scenarios that have become less than uncommon and more than usual – losses could tally upwards of €250 billion. As has been typical, leaders have consistently downplayed the severity of the Euro-zone crisis, and we believe that this is the first of many bailouts Spain will need for its banking sector to survive.)

Benefiting from this confusion has been the Japanese Yen, which in part has aided by falling yields across the globe. From a technical perspective, the USDJPY’s failure to close above the 80.60 former swing high on Friday signaled the potential for a reversal towards 79.50; we expect buying interest to return soon.

Taking a look at credit, the European periphery is back under pressure, with Italian, Portuguese, and Spanish debt leading the decliners while German debt, as expected, has outperformed. The Italian and Spanish 10-year notes’ yields rose to 5.902% and 6.461%, respectively. On the shorter-end of the yield curve, Italian debt has dramatically underperformed, with the 2-year note yield surging to 4.073%.

The Japanese Yen has been the top performer on the day, with the USDJPY surging by 0.98 percent in early trading on Monday. The Australian Dollar has emerged as the worst performer, depreciating by 0.75 percent against the US Dollar. The Euro and the highly correlated Swiss Franc have dropped as well, with the EURUSD falling by 0.69 percent and the USDCHF rallying by 0.69 percent. 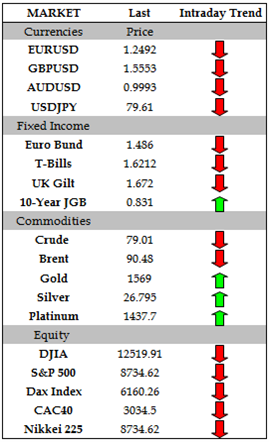 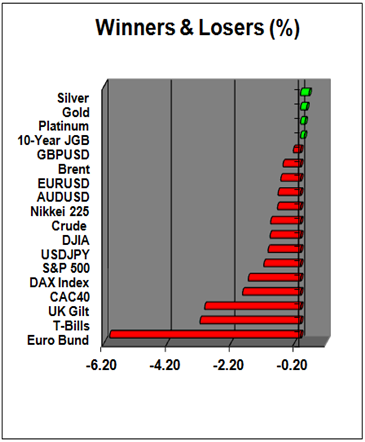 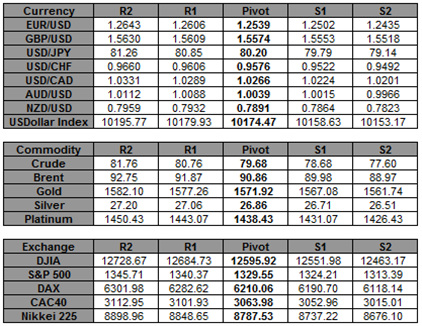