US Dollar Consolidates after Strongest Day since November 9; Yen Lags

High beta currencies and risk-correlated assets steadied in the overnight, in fact picking up a few points against the US Dollar, as market participants readjusted their holdings following yesterday’s massive sell-off in the Euro and US equity markets. The US Dollar’s strongest day since November 9, 2011, comes without surprise however, as it was made clear on Wednesday that the Federal Reserve has little intention of introducing a massive easing program unless the US economy suffers a material pullback in growth. That’s to say that a few poor Nonfarm Payroll releases and a slight slowdown in growth, largely predicated around concerns of a slowing China and Europe as well as the impending fiscal cliff, aren’t enough to get the Fed to budge.

While the Fed is seemingly standing still, the European Central Bank has introduced new efforts to help stem the crisis, announcing today that it is relaxing its collateral rules."The Governing Council has reduced the rating threshold and amended the eligibility requirements for certain asset-backed securities (ABSs)," the ECB said earlier today. "It has thus broadened the scope of the measures to increase collateral availability which were introduced on 8 December 2011 and which remain applicable."

This means that the ECB will accept a wider range of assets of lower quality for banks to participate in its lending operations. Now, banks can pledge residential mortgage backed securities (RMBS), auto loans, consumer finance asset backed securities (ABS), etc, rated as low as ‘BBB.’ Prior to this announcement, banks had been only allowed to pledge assets rated ‘A-’or higher.

Perhaps this is bit of a reach, but I believe that this could potentially be the groundwork for a third longer-term refinancing operation (LTRO). Aligning neatly with the ECB’s relaxation of collateral rules is the ‘big four’ Euro-zone leaders’ meeting on Monday, in which the heads of France, Germany, Italy, and Spain will meet to discuss ways to solve the crisis. Italian Prime Minister Mario Monti went so far as to say that if the meeting does not yield the necessary solutions to the crisis "there would be progressively greater speculative attacks on individual countries, with harassment of the weaker countries."

Taking a look at credit, the hopes for major announcement next week have saved periphery debt, especially on the Iberian Peninsula. Portuguese and Spanish 10-year yields have dropped by 59.7-basis points and 18.2-bps, sending their respective yields down to 9.055% and 6.346%. Italian debt is strengthening as well, with the 10-year note yielding 5.700%.

The Japanese Yen is the worst performer on the day, with the USDJPY appreciating by 0.12 percent thus far on Friday. The New Zealand Dollar continues to outperform, gaining 0.52 percent against the US Dollar. The Euro is slightly weaker, with the EURUSD losing 0.31 percent on the day. As expected, the British Pound is trailing as well, gaining a mere 0.08 percent against the US Dollar. 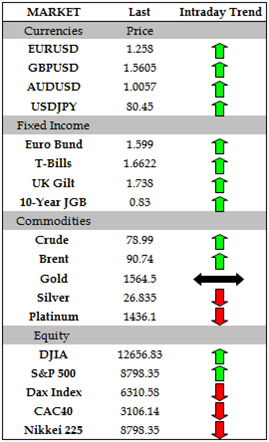 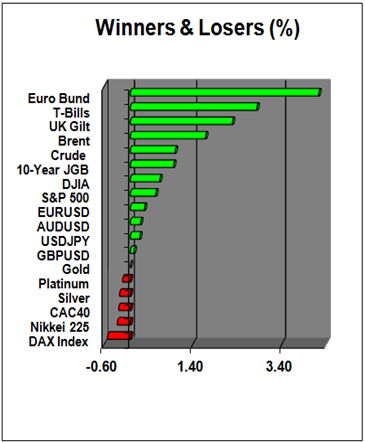 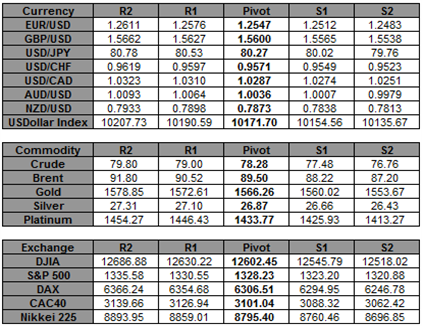