After all the pomp and circumstance in the weeks following the dismal May Nonfarm Payrolls report released on June 1, it appears that calls for more quantitative easing from the Federal Reserve were nothing more than hot air. Yesterday, as expected, the Fed announced that it would not be implementing a third round of full-blown quantitative easing (outright or unsterilized bond purchases) and instead would seek to extend its Operation Twist program. The program will function through the end of the year and will consist of the Fed selling short tenor securities in order to purchase longer-dated securities, in order to help flatten the yield curve.

Accordingly, just like the original Operation Twist announcement in September 2011, market participants were largely disappointed that another massive liquidity package was not being unveiled (although the reaction this time around was far less severe). The US Dollar has emerged as the top performer in the aftermath of the announcement, with Crude Oil, Gold, and the Japanese Yen – indicators for the QE3 trade – have all declined substantially.

Meanwhile, out of Europe, it’s become clear that we should see a showdown between the new Greek leadership bloc and the European bailout coalition, the European Troika, in the coming weeks given the vastly differing positions each side is taking in regards to the Greek bailout packages. According to reports, Greek leaders have reached consensus on a revised bailout deal they will seek to implement with the Troika’s blessing; but that looks like a pipe dream. German Chancellor Angela Merkel, earlier this week, said that there will be “no leeway” on the agreed upon terms, while Dutch Finance Minister Jan Kees de Jager today said that there will be “no softening of conditions” for Greece, and that room for Greece is “extremely limited.” As has been the case during the entirety of this crisis, especially since September 2011, whatever Northern Europe wants Northern Europe gets, and it is highly unlikely that the positions of Chancellor Merkel and Finance Minister de Jager change dramatically when both sides coming to the negotiating table.

Taking a look at credit, the hope that a ‘bazooka’ will be announced to drive down yields has been a net-positive influence on European debt, with yields falling across both the core and the periphery. Of note, Italian and Spanish debt has improved substantially, with their respective 10-year yields falling to 5.684% and 6.500%. On the shorter-end of the curve, Italian and Spanish debt are the top performers as well, with their respective 2-year yields dropping to 3.683% and 4.424%.

The Japanese Yen is the worst performer on the day, with the USDJPY appreciating by 0.90 percent thus far on Thursday. The New Zealand Dollar’s losses have been stemmed give the strong growth readings and the Kiwi has only depreciated by 0.28 percent against the US Dollar. The US Dollar, as the top performer, has also strengthened substantially against the Euro, with the EURUSD sliding 0.86 percent. 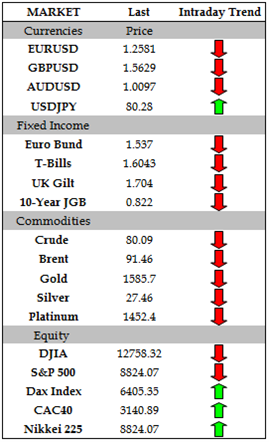 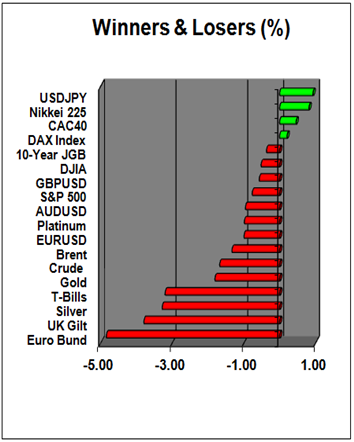 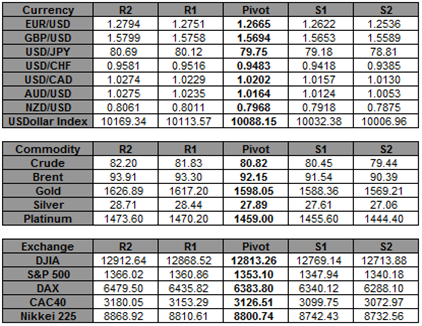