Gold, Japanese Yen Fall While US Dollar Stabilizes Ahead of FOMC

- The Same Song and Dance for the Fed – WSJ

Since June 1, when the Nonfarm Payrolls report for May was released, the US Dollar has been under immense pressure. The dismal labor market reading for the United States showed that jobs growth has somewhat stalled, and since then, market participants have been actively betting that the Federal Reserve will introduce another major easing package to help usher along what has been an overall sluggish recovery.

Certainly, in the past few days, the expectation of more accommodative policy has surged. The Dow Jones FXCM Dollar Index (Ticker: USDOLLAR), after peaking on June 1 at 10312.73, has shed as much as 2.78 percent, falling as low as 10026.23 yesterday, the index’s lowest reading since May 15. In the past five days alone, since rumors emerged that the G20 was considering a globally coordinated intervention to help calm markets should the Greek elections yield an unfavorable result, the Dollar Index has dropped by as much as 1.53 percent. It’s fairly evident that the threat of more easing, an ultimately fiat-dilutive measure, as hurt the US Dollar’s prospects.

Today, however, it appears that market participants are signing a different tune, given the performance of Gold and the Japanese Yen, the two alternative safe havens to the US Dollar when the Fed is expected to or actually implements a more accommodative monetary policy. Gold has fallen by 0.67 percent and is now 1.60 percent off of its weekly high while the Japanese Yen has pared 0.45 percent against the US Dollar. Perhaps these are the ‘canaries in the coal mine’ for the rate decision today: if another major easing package was expected, the US Dollar would be selling off across the board while Gold and the Japanese Yen would be posting moderate gains. Our outlook for the meeting fits neatly with these analyses.

Later today, Chairman Ben Bernanke will release the Fed’s revised economic projections as well as hold his quarterly press conference. Calls have been high for a QE3 package, especially among the Fed’s more dovish members such as Charles Evans (who last week stated that he would support any form of more accommodation), but it’s important to note that the Fed voting bloc has been a bit more conservative lately.

At his Congressional testimony a few weeks ago, Chairman Bernanke made it clear that the Fed would not fill the void created by the US’ irresponsible fiscal policy, and that the Fed could only do so much to achieve its dual mandate of price stability (with inflation near 2%) and maximum employment. Accordingly, we do not expect a full-blown QE3 package; but instead, we expect, at most, that the FOMC will announce an extension of Operation Twist. Similar to how markets reacted in September when Twist was announced, this could lead to a major US Dollar rally.

The Japanese Yen is the worst performer on the day, with the USDJPY appreciating by 0.45 percent thus far on Wednesday. The British Pound, despite the Bank of England’s dovish minutes, is the top performer, gaining 0.11 percent against the US Dollar. The EURUSD is barely higher on the day, up 0.11 percent, while the Australian Dollar is unchanged against the US Dollar. 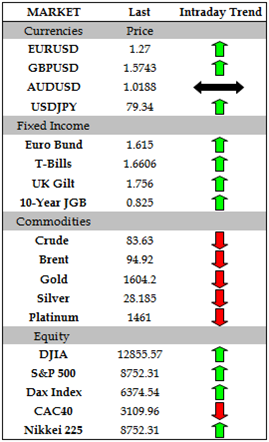 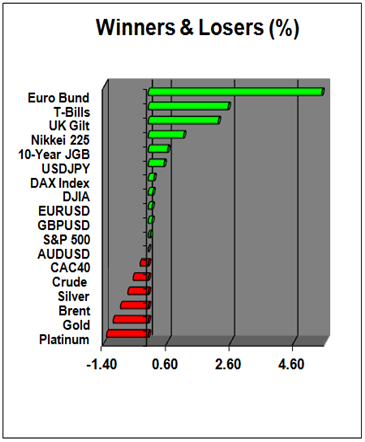 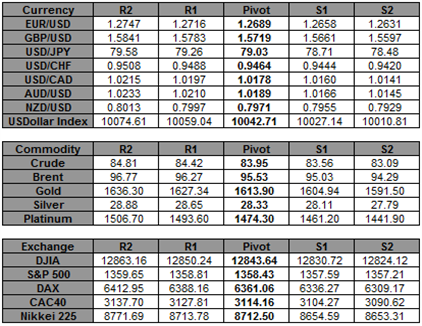