Japanese Yen Outperforms Ahead of Greek Votes While Euro Lags

An explosive end to the US cash equity session yesterday (for the second day in a row) has seen little follow-through in the Asian and European trading sessions thus far on Friday. Shortly before markets closed yesterday, Reuters reported that G-20 leaders were preparing measures for a global coordinated intervention should the weekend’s events necessitated emergency liquidity measures. As expected, the rumor of a potential liquidity injection stoked risk-appetite because, hey – why does it even matter than global leaders need to consider emergency measures?

When considering these rumors, there is a great deal for concern. The Bank of England’s announcement to flood the markets with cheap credit comes as the first major move to bolster the country’s financial firewall since 2008. Let’s rewind: global central banks last started to prepare comprehensive measures in the fall of 2008, when Lehman Brothers was already a part of the history books and the collapse of the US housing market was dragging down financial markets across the globe. So to say that this is a welcomed development – that central banks are preparing to and have already announced major liquidity measures – is borderline absurd, and rather, should be a major warning sign for investors.

Along these lines, it is difficult to imagine that the G-20 will accomplish much of anything this weekend, considering that the G-20 has done little in the past to help the Euro-zone crisis. Furthermore, it is highly unlikely that the Federal Reserve or even the European Central Bank acts on the whims of desperate politicians – central banks need to remain as independent as possible during times of crises so as to avoid short-term fixes and concentrate on the bigger, more important picture: sustainable long-term economic growth. As history has shown, the Federal Reserve’s desire to stimulate markets via quantitative easing helps inflate nominal asset prices but has little impact on the broader economy; true, longer-term interest rates have fallen (which helps mortgages and thus the housing market), but when the economy becomes dependent on cheap credit a far more dangerous bubble forms.

Taking a look at credit, especially in response to the global coordinated intervention rumors, European sovereign debt is stronger across the board, with the Greek 10-year note yield falling 122.9-basis points ahead of the election this weekend. The Spanish 10-year note yield hasn’t recovered, however rising by 0.8-bps to 6.859 percent. On the shorter-end of the yield curve, Italian and Spanish 2-year note yields have fallen, down to 4.431 percent and 4.844 percent, respectively. Also worth mention: the US 10-year Treasury Note yield has fallen to 1.581 percent, a sign that investors are seeking safety headed into the weekend.

The Japanese Yen is the top performer today, gaining 0.79 percent against the US Dollar. The Canadian Dollar is the worst performer, with the USDCAD appreciating by 0.26 percent. The Euro is also weaker, with the EURUSD depreciating by 0.25 percent. The British Pound, despite having the BoE announcing the liquidity injection plans, is up some 0.08 percent against the US Dollar. 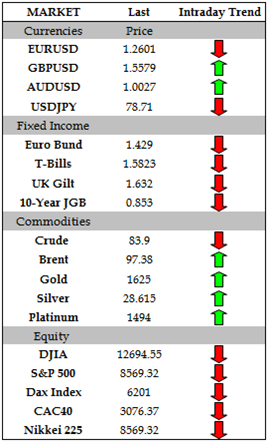 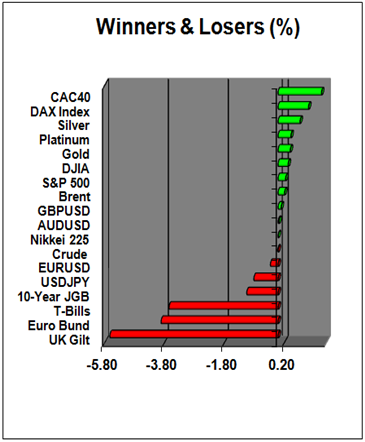 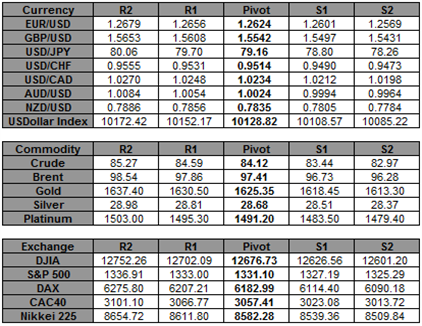