EURUSD Inches Towards 1.26 Ahead of Critical Weekend

Ranges were tight in the overnight with most of the majors (save the New Zealand Dollar, which was boosted by seemingly hawkish commentary from the Reserve Bank of New Zealand) trading in less than half of a percent range against the US Dollar. The US Dollar’s high was set early in the session, considering that the rating agencies Egan-Jones and Moody’s Investor Services each downgraded Spain near the end of or after the US session close yesterday, putting downside pressure on high beta currencies and risk-correlated assets in early Asia today.

Heading into the European session, with the Australian Dollar and the Euro leading the slide, the US Dollar posted a solid comeback following an exceptionally disappointing Italian bond auction. Italy sold €3 billion in 2015 bonds, with yields soaring to 5.30 percent from 3.91 percent a month ago; €627 million in 2019 bonds, with yields up from 5.21 percent to 6.10 percent; and €873 million in 202 bonds, with yields soaring from 5.33 percent to 6.13 percent. Indeed, these bond yields are approaching unsustainable levels, and this has to be of concern to European policymakers; the market is slowly moving on to Italy (though given recent correlations to sovereign credit default swaps, it appears the EURUSD has been tracking the situations in Greece and Spain more so than the one in Italy over the past week).

And while high beta currencies and risk-correlated assets fell back after the Italian bond auction, it is worth noting that some weak US data spurred more speculation for a third round of quantitative easing ahead of the US cash equity open today. But that wasn’t the big news; the commentary from Jens Weidmann, head of the Bundesbank (Germany’s central bank) and a voting member on the European Central Bank’s Governing Council, is the key commentary on the day.

Taking the wind out of hopes for fiscal union, the head of the Bundesbank said that such a move would require significant “changes to European Union treaties,” and that a fiscal union still wouldn’t solve the issues of “high unemployment” and “poor competitiveness.” Furthermore, in a hint about his stance on an ECB rate cut or looser monetary policy, Mr. Weidmann said that its still “too soon to speculate” about the ECB offering another longer-term refinancing operation (LTRO) and that higher inflation rates in the Euro-zone (which would come after an ECB rate cut, in theory) and that it would diminish the central bank’s credibility.

Taking a look at credit, Spanish 10-year notes remain significantly weaker, with the yield rising by 14.7-basis points to 6.835 percent. After the auction, the Italian 10-year note yield has fallen to 6.118 percent. 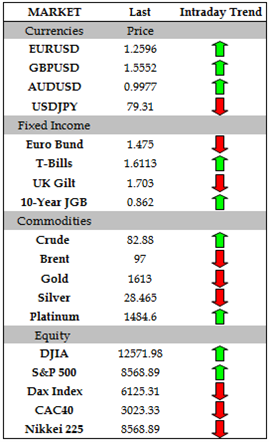 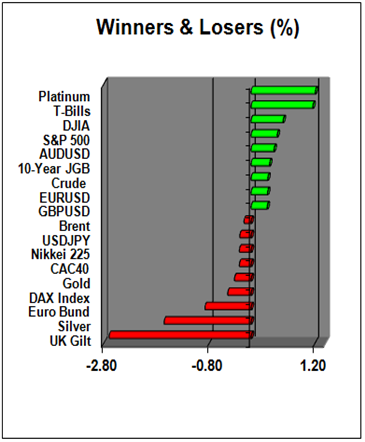 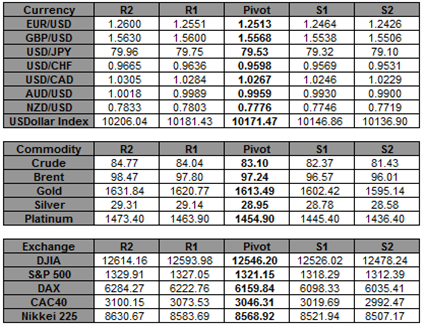