Yesterday’s price action was very technical: high beta and risk-correlated assets hit overbought short-term levels at the open in Asia and finished the day at their daily lows by the end of the US session. The intraday swing was indeed enormous, with the S&P 500 falling approximately 2.40 percent from its overnight high in the futures market, marking the single largest one day swing by the benchmark index in 2012 thus far.

However, at the start of Asian trading some hopeful comments by various global policymakers or at least financial industry officials buoyed risk-appetite enough to catapult higher yielding currencies and risk-correlated assets throughout the overnight sessions. Federal Reserve pema-dove Charles Evans quipped (unabashedly) that he is in favor of “any accommodative policy,” and that extending Operation Twist and expanding asset purchases would be “useful” for the US economy. With market participants desperate for whatever easing they can get, such blind devotion to a looser monetary policy has spurred risk-appetite.

Also boosting risk-appetite were comments by the International Swaps and Derivatives Association (finance industry official, essentially), saying that not only would the Spanish bailout not trigger subordination, but it would not trigger the sovereign credit default swaps (CDS) either – no CDS trigger means that there won’t be a liquidity drawdown in the near-future, which spurred investors to shed their lower yielding currencies such as the Japanese Yen and the US Dollar.

With the Euro-zone crisis on fire and the Chinese growth picture seemingly more stable after this weekend’s data – mainly on a much stronger than expected Trade Balance figure (which doesn’t seem to fit in with trade data from China’s largest trading partners, but markets are generally ignoring this point so it’s neither here nor there) – the commodity currencies have the impetus to continue their recovery after a brutal May. Accordingly, the Australian, Canadian, and New Zealand Dollars have been the top performing currencies thus far on Tuesday.

Taking a look at credit, pressure is on across the Euro-zone, not just in the periphery anymore. Italian and Spanish bonds are showing the most distress (save Greece), with their respective 10-year note yields climbing to 6.210 percent and 6.707 percent. In fact, the Spanish 10-year note yield hit its highest level since November 28 – a clear indication that the bailout has failed. Broadly speaking, the 7 percent yield on the 10-year note appears to be the threshold for a bailout from the European Troika, as it was at that level Greece, Ireland, and Portugal started exploring options for international help.

The New Zealand Dollar has been the top performing currency today, gaining 0.77 percent against the Euro and the US Dollar. The Australian and Canadian Dollars are also up against the Euro and the US Dollar, appreciating by 0.58 percent and 0.37 percent, respectively, against each. Accordingly, the EURUSD is unchanged on the day, but only after trading in a 0.64 percent range from its daily low to high. 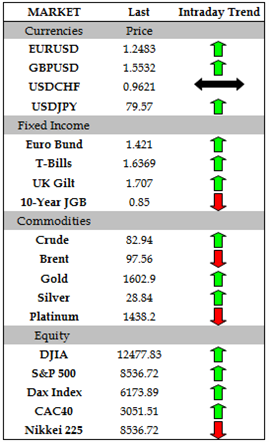 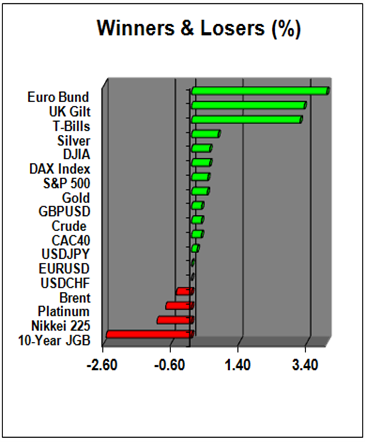 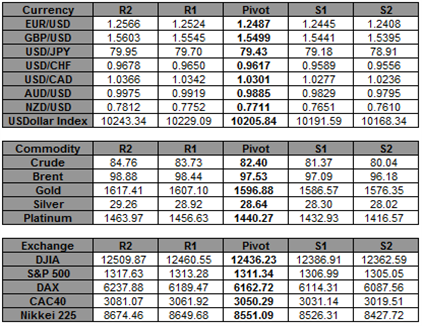