After yesterday’s massive rally – in fact the biggest rally since December by the Australian Dollar and the Dow Jones Industrial Average since December 20, 2011 – it would appear that all global issues have been resolved. The Australian economy, for example, just completed the ‘Triple Crown’ for its major releases this week: a less dovish Reserve Bank of Australia than expected, which helps keep yields elevated; a blowout first quarter growth reading, which means concerns over slowing Asian growth may be exaggerated; and a blowout labor market reading for May, and while it showed that the Unemployment Rate ticked higher (to 5.1 percent from 5.0 percent), that’s a symptom of more workers entering the labor force.

Flash forward into the European session and higher yielding currencies and risk-correlated assets began to come off. The flight to safety was merely temporary – as central banks were indeed active in the market. Looking at the economic docket, price action near the start of the European session would lead one to believe that the Bank of England had gone through and loosened its monetary policy. Instead, it was the People’s Bank of China that was active in the market, and, in a surprise move, the central bank announced its one-year lending and deposit rates would be cut by 25-basis points, effect from Friday. Thus, even though market participants were broadly disappointed by inaction from the Bank of England, they received the stimulus they’ve been longing, just from a different source.

Much of the rally has been predicated on the hope that central banks globally will ease. Put frankly, it’s hard to think of a legitimate reason how today’s testimony by Federal Reserve Chairman Ben Bernanke will live up the hype surrounding it since Friday’s dismal Nonfarm Payrolls report. The Fed has made it abundantly clear that it is taking transparency and credibility very seriously now, and a few months of weak jobs growth after exceptionally strong jobs growth is nothing to change monetary policy for – yet. Furthermore, in light of what’s been going on with weakening Asian and European growth prospects, the US economy has been performing relatively better. Also, rhetorically: when was the last time a Fed Chairman announced the plans for a major stimulus package at a Congressional testimony?

Taking a look at credit, European periphery government debt continues to show signs of improvement, led by none other than Italian and Spanish notes on the shorter-end of the yield curve. The Italian 2-year note yield dropped to 3.569 percent while the Spanish 2-year note yield fell to 4.122 percent; both of these are sitting at their weekly lows in terms of yield (or highs in price).

The Australian Dollar has been the top performer today following the blowout labor market reading and the PBoC rate cut, gaining another 0.65 percent against the US Dollar (and is now up 3.02 percent since Friday). The British Pound has also exploded higher after the BoE chose not to alter its monetary policy, with the GBPUSD appreciating by 0.54 percent. The Japanese Yen continues to weaken, shedding 0.63 percent. 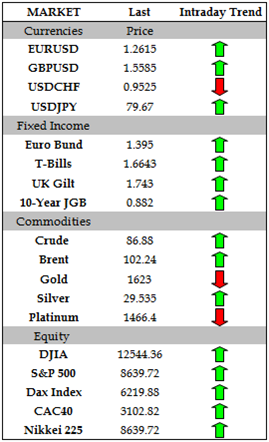 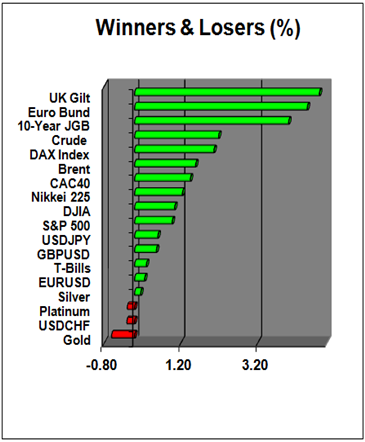 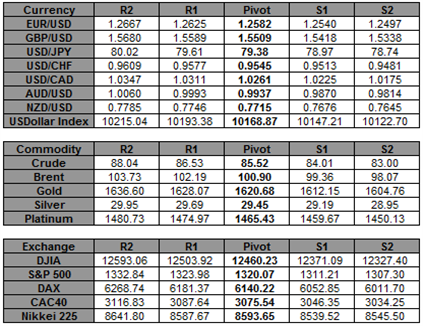