Aussie Rallies as US Dollar Sells Off Across Board Ahead of ADP, GDP

The selloff that started ahead of the US cash equity open on Wednesday continued throughout the day, leading to a continuation in the early hours of Asian trading on Thursday. However, after higher yielding currencies and risk-correlated assets found footing ahead of the Tokyo open, the usual suspects of the recent flight to safety – the Japanese Yen and the US Dollar – were shed moderately through the remainder of Asian trading with some modest continuation through early European trading thus far.

The move higher by high beta currencies, such as the Australian and New Zealand Dollars, did not come before the US Dollar set fresh 2012 highs. The Dow Jones FXCM Dollar Index (Ticker: USDOLLAR) rallied to 10270.51, the highest level the index has seen since December 2010, which marked only the second month of the Federal Reserve’s quantitative easing round two package. As the story goes, it was all downhill from there for the US Dollar, at least for the next six months, until Greece’s problems flared up in May 2011.

While there was little market moving data due out of Asia, there were two events that transpired worth discussing. First, upon the close of trade on Thursday, the Chinese Yuan finished up its worst month (in terms of performance against the US Dollar) since a peg ended in July 2005. The People’s Bank of China was forced to weaken its Yuan reference rate by 0.9 percent amid declining export growth, most notably to Europe, where shipments fell by 2.4 percent. Given the weakness of the Euro – and the weakest EURCNY cross-rate in a decade – it is unlikely that Chinese exports to the Euro-zone rebound meaningfully any time in the next few months.

Also of note was the performance of Australian bonds, which rallied to fresh highs (lows in terms of yield) as traders ramped up bets on another Reserve Bank of Australia rate cut. The Australian 10-year government bond yield dropped as low as 2.844 percent before rebounding to 2.916 percent, while 2-year government bond yields fell to 2.1015 percent before rebounding to 2.2095 percent. According to the Credit Suisse Overnight Index Swaps, there is a 48 percent chance of a 50-basis point rate cut at the RBA meeting on June 5. Earlier in the session, traders were pricing in a 62 percent of a 50-bps rate cut. 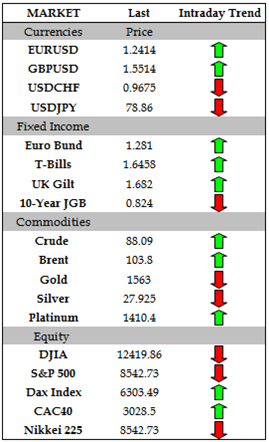 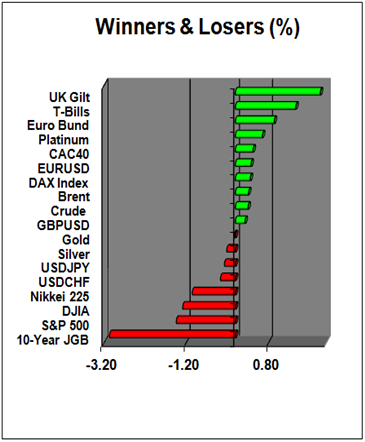 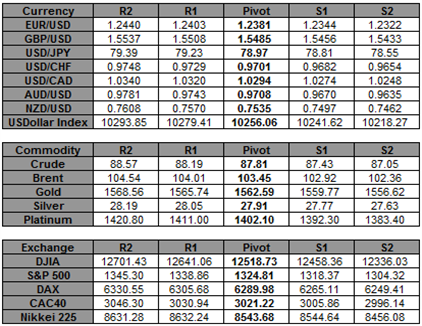 With most major European data out of the way (most notably German labor market figures), we now turn to key data ahead of the US cash equity open. At 12:15 GMT, the ADP Employment Change report for May is due, and according to a Bloomberg News survey, 150K jobs were added this month (this is an improvement over +119K in April). However, the more important piece – the first quarter gross domestic product revision – is due at 12:30 GMT. Given estimates, the second release of the first quarter headline growth reading for the United States will be disappointing.

Today’s GDP release is expected to show that the US economy grew at a modest 1.9 percent rate in the first quarter, down from the 2.2 percent initial reading. This comes as little surprise given the fact that two of the United States’ largest trading partners – China and the Euro-zone – faced diminishing growth prospects through the first few months of the year. In light of recent commentary by Federal Reserve officials, it is clear that a third round of quantitative easing – the program that inflates asset prices, destroys Treasury yields, and dilutes the US Dollar – is very much on the table. A weak print could prompt speculation that more QE is on the way, which will be negative for the USD; a strong print will keep the Fed on the sidelines, which will be positive for the USD. The key pair to watch is USDJPY.