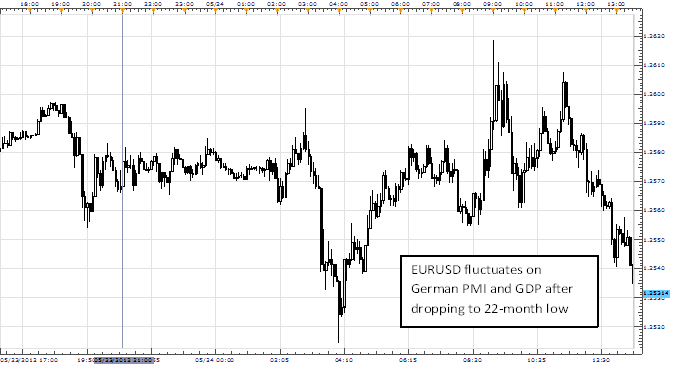 The Japanese Yen was the top performer for the second straight day as investors continued to shy away from risk-correlated assets. Meanwhile, the euro fluctuated against the dollar after tumbling to a 22-month low as traders speculated on measures that may be taken to alleviate the euro zone’s debt crisis. Investors who were eagerly awaiting the EU Summit were left disappointed. The summit ended with a mere warning to Greece to stick to its bailout terms while France and German remained deadlocked over the issues of euro bonds.

The top market moving events to come out of Europe were the release of German first quarter Gross Domestic Product (GDP) growth and Purchasing Manager Index (PMI) figures for the manufacturing and service industries. Germany’s economy grew by 0.5 percent in the first quarter, reinforcing its strength as the euro bloc’s largest economy. However, a drop in inventories, reflecting weakening new orders, served as a clear warning for slowing growth in the coming quarters. A decline in manufacturing PMI further curtailed optimism for future growth prospects.

Looking across the English Channel, first quarter GDP in the U.K. contracted more than expected as the economy continued to sag. The British economy contracted for a third straight quarter, falling into a deeper recession than many had anticipated. The latest figures sent the pound tumbling against the U.S. dollar, as it raised the likelihood of further monetary easing by the Bank of England.

The two key risks events that came out in the Asian markets were the release of the Bank of Japan’s (BOJ) economic report following its decision yesterday to keep its monetary policy unchanged, and China’s flash manufacturing PMI figures for May. BOJ Governor Masaaki Shirakawa emphasized the Bank’s resolve to maintain its accommodative monetary policy, but ruled out easing purely for the purpose of weakening the yen. Shirakawa noted that the biggest factor in currency movements and the appreciation of the yen is risk aversion, as investors flocked to safe-haven currencies.

Meanwhile, a private sector survey showed that China’s industrial sector contracted in May for the seventh straight month. The PMI figures signaled that sluggish economic conditions are likely to continue through the first half of the year. This follows Chinese Premier Wen Jiabao’s pledges over the weekend to focus more on bolstering Chinese economic growth in a bid to orchestrate a soft landing in the coming quarters. As a result, commodity currencies such as Australian and Canadian dollars weakened, erasing earlier gains against the greenback.

Looking ahead, the major market event to watch out for overnight will be the release of Japan’s consumer inflation figures and survey results on German consumer confidence. While German household sentiment is largely expected to remain unchanged, economists are projecting slight improvement in Japan’s deflationary problems as the Bank of Japan continues its efforts to beat deflation.

Taking a look at credit, pressure in the European debt market eased, with Spanish and Italian 10-year bond yields falling 4.0 bps to 6.164 percent and 9.7 bps to 5.569 percent, respectively.

The euro fluctuated after tumbling to a 22-month low of $1.2515 against the U.S. dollar. Risk aversion continued to rule the roost with investors seeking safety in the yen and U.S. dollar. Meanwhile, risk-correlated assets and higher-yield currencies such as the Australian and Canadian dollars erased earlier gains after the announcement of ongoing Chinese manufacturing weakness.