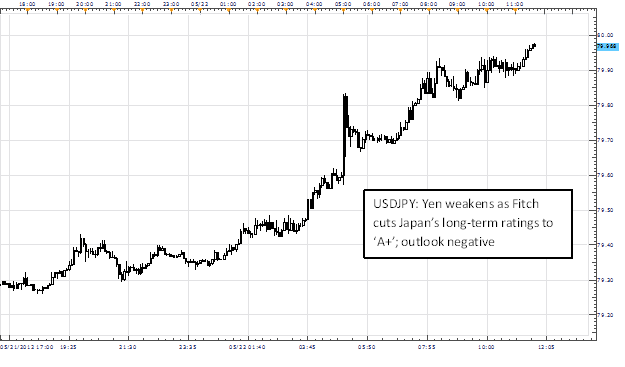 The US Dollar (ticker: USDOLLAR) traded higher against all major counterparts while the euro struggled ahead of tomorrow’s EU summit, as euro zone debt woes continued to weigh on the global economic outlook. In its semi-annual report, the Organization for Economic Cooperation and Development (OECD) cautioned that Europe’s debt turmoil could spiral and seriously damage the world economy. The OECD’s remarks served as a warning to European Union leaders ahead of tomorrow’s summit, amid ongoing Greek political instability and contagion fears.

Overnight, the top market moving developments came in the form of slower-than-expected U.K inflation and a cut in Japan’s sovereign-credit rating by Fitch Ratings. Consumer prices in the U.K. softened to 3 percent in April from a year ago, down from 3.5 percent in March. Economists had forecast headline CPI inflation to rise 3.1 percent. With price pressures likely to ease further on contracting output, weaker pay growth and ongoing economic slack, the International Monetary Fund (IMF) called for increased quantitative easing by the Bank of England (BoE) in a bid to support the flagging U.K. economy. The pound subsequently weakened against the greenback as pressure mounts on the BoE to add more QE.

Looking across to the Asian markets, Fitch Ratings announced its decision to lower Japan’s sovereign-credit rating citing the country’s massive public debt. Japan’s long-term foreign exchange rating was downgraded by two notches to ‘A+’ from ‘AA’ and its local currency rating was cut by one level to ‘A+’ from ‘AA-‘. Fitch warned of further downgrades unless the government takes new fiscal policy measures to stabilize public finances and consolidate debt. After Japan’s ratings cut, the yen tumbled against the U.S. dollar to a session low of 79.85 yen. However, this weakness in the yen is unlikely to last as Japanese government bonds are primarily held by domestic investors. Japan’s ratings downgrade comes ahead of tomorrow’s rate decision by the Bank of Japan, with economists forecasting the bank’s benchmark rate to remain unchanged at 0.1 percent.

Looking ahead, the top market events to watch out for will be the Bank of Japan’s rate decision and the release of minutes from the Bank of England’s May monetary policy meeting at 8:30 GMT (4:30 GMT) tomorrow morning. Should the BoE adopt a less dovish tone in its minutes, we could see a bullish correction in the pound.

The U.S. dollar was the top performer, rallying against all its major peers as the euro debt crisis continued to weigh on risk sentiment. Meanwhile, the Japanese Yen underperformed for a second day, trailing all of its major currency counterparts and plummeting 0.83 percent against the U.S. dollar.