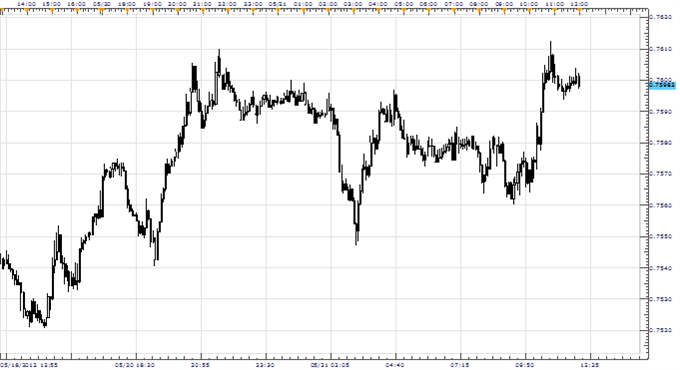 The US Dollar (ticker: USDOLLAR) traded lower against the Australian Dollar and other high-risk counterparts on a modest improvement in financial market sentiment, but overall momentum left it poised for modest gains against the Euro and British Pound. It was a quiet start to the trading week as highly-anticipated events over the weekend failed to produce material breakthroughs or shifts in financial market sentiment.

The biggest event risk on the weekend was a highly-anticipated summit of G8 leaders. Disappointingly little action or new rhetoric nonetheless meant that Chinese Premier Wen Jiabao’s pledges to focus more on bolstering Chinese economic growth took the spotlight. Jiabao indicated that policies may be loosened further as inflation moderates. As a result, commodity and risk-correlated assets such as the Australian dollar, NZ dollar and Canadian dollar strengthened against the greenback. Prices of growth-dependent commodities like copper and crude oil similarly edged higher on stronger Chinese growth prospects.

Yet gains in broader markets were muted as Greek contagion fears continued to weigh on the global economic outlook. G8 leaders vowed to take steps to combat financial turmoil and revive a global economy threatened by Europe’s continuing debt crisis. But they were unable to offer a solution to Greece’s debt woes ahead of elections to be held on June 17.

Looking ahead, the top market event to watch out for will be the UK report for April on its Consumer Price Index (CPI), due for release at 08:30 GMT on Tuesday morning (04:30 EDT). Consumer prices in the UK are expected to have risen 0.6 percent in April from a month ago, while core inflation is expected to have fallen to 2.0 percent on an annual basis from 2.5 percent in March. Should core inflation fall in line with or more than projected, we may see calls for further quantitative easing by the Bank of England which is likely to weaken the pound.

Taking a look at credit, pressure is back on the shorter-end of the curve, with yields on Spanish 2-year notes climbing to 4.210 percent. On the longer-end, Greek 10-year notes led rising yields, increasing 15.6-basis points to a 29.299 percent yield.

The New Zealand Dollar is the top performer, rallying by 0.55 percent against the US dollar, which is among the weaker currencies on the day. The Australian and Canadian dollars were also higher against the greenback, gaining 0.12 percent and 0.05, respectively. The Japanese Yen trails all of its major currency counterparts, with the USDJPY declining by 0.38 percent.