- Jobless Claims in US were Unchanged at 370,000 Last Week – Bloomberg

- Several on FOMC said Easing May Be Needed on Faltering – Bloomberg

Price action was relatively muted in the overnight sessions, with the Asian market participants bidding up higher yielding currencies and risk-correlated assets and European market participants pulling them back down to their daily opening prices. Ahead of the US cash equity session, the US Dollar was relatively unchanged as a result, but there were still some big moves elsewhere.

The two biggest developments among the majors come out of Japan and the United Kingdom. In terms of Japan, first quarter growth came in much better than expected and the fourth quarter reading from 2012 was revised higher. The 4.1 percent preliminary print was above the 3.5 percent growth forecast, according to a Bloomberg News survey, and the prior reading was revised higher from -0.7 percent to 0.1 percent, on an annualized-basis. Growth was also stronger on a quarterly-basis, up 1.0 percent against a forecast of 0.9 percent, with the fourth quarter reading revised higher to 0.0 percent from -0.2 percent.

The Japanese Yen has been stronger as a result today, a sign in my eyes that market participants are pricing out the possibility of another Bank of Japan stimulus package. Indeed, after the better than expected growth data a think tank report suggested that the BoJ would choose not to ease at its next meeting, providing an additional catalyst to provoke the Japanese Yen’s move higher (UPDATE: the Yen has continued to strengthen all morning following the poor Philly Fed print).

Meanwhile, the British Pound has maintained its losing streak against the US Dollar, pressing the 1.5800 level after testing 1.6100 just on Monday. In part this may be due to commentary out of British policymakers, fiscal and monetary alike. Chancellor of the Exchequer George Osborne said that Britain is making “necessary” contingency plans to deal with the fallout from a possible Greek exit from the Euro-zone, stating that “the genie is out of the bottle” now that European ministers and European Central Bank officials are “openly speculating” on Greece’s departure. Although British labor market data was better than expected yesterday, there’s clearly some concern that a dramatic downturn in the Euro-zone could significantly hurt the British economy. While the EURGBP has slid amid the crisis, the recent tumble of the GBPUSD could be a sign that liquidity issues are coming to the foreground.

Taking a look at credit, pressure is back on the shorter-end of the curve, with Italian and Spanish 2-year notes climbing to yields of 3.628 percent and 4.078 percent, respectively. On the longer-end, Greek 10-year notes lead the decline, sinking 36.9-basis points to a 27.608 percent yield.

The Japanese Yen is the top performer, rallying by 0.83 percent against the US Dollar, which is among the weakest currencies on the day. The Australian and New Zealand Dollars are also higher against the Greenback, up 0.31 percent and 0.24 percent, respectively. The British Pound trails all of the majors, with the GBPUSD depreciating by 0.57 percent. 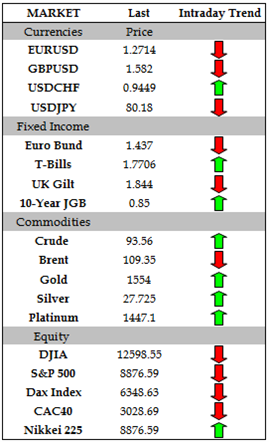 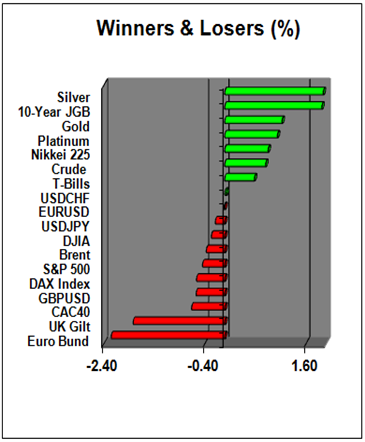 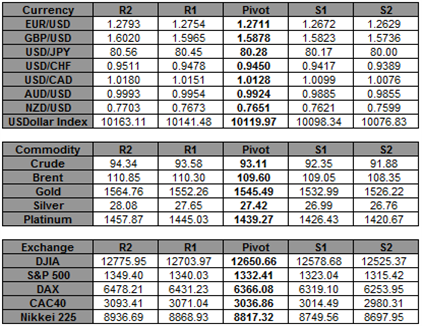