- Retail Sales in US Cooled in April – Bloomberg

- EURUSD Falls to 1.2770 after Greek Government Fails to Form – DailyFX

Uncertainty remains public enemy number one today. A bit of better than expected Euro-zone growth data helped ease fears of the region’s sharp contraction earlier in the day, with high beta currencies, such as the Australian and Canadian Dollars, posting modest gains ahead of the US cash equity open. While broad Euro-zone GDP in the first quarter was flat, it was slightly improved on a quarterly-basis (0.0 percent versus -0.2 percent from -0.3 percent in the fourth quarter of 2011) as well as on a yearly-basis (0.0 percent versus -0.2 percent from 0.7 percent).

This upwards print in GDP comes on the back of much stronger growth data out of Germany, Europe’s largest economy. The German economy grew by 1.7 percent q/q in the first quarter, beating the 0.9 percent forecasted, according to a Bloomberg News survey. Similarly, on a yearly-basis, growth was up 1.2 percent versus a forecast of 0.8 percent. It’s fairly evident that the German government isn’t implementing the same harsh fiscal consolidation measures prescribed to other European governments: Italian first quarter growth contracted by 0.8 percent q/q and by 1.3 percent y/y, both worse than the forecasted and the prior readings.

While the market perceived the data as optimistic, any bullish momentum was quickly lost shortly before 13:00 GMT this morning after Greek leaders announced that they failed to reach agreement on a coalition government, guaranteeing the country would be headed back to elections. The Greek exit from the Euro (and thus the Euro-zone, not the European Union), once disregarded as far-fetched is now looking increasingly likely (a point long-argued by this analyst since July 2011).

On the back of the Greek developments, the EURUSD is currently sitting at fresh monthly lows at 1.2757 while the AUDUSD is hovering approximately 20-pips above its yearly low of 0.9944. While the USDJPY initially fell on the news, the US data this morning bolstered the argument against more quantitative easing, helping keep the pair above 80.00, for now. A move lower towards 79.10/15 is still expected by USDJPY.

Taking a look at credit, the Greek news has destroyed investor sentiment, with the German 10-year Bund trading at an all-time low of 1.455 percent yield. The Greek 10-year bond, on the other hand, surged 157.6-basis points to a yield of 27.873 percent. On the shorter-end of the curve, the periphery is leading the decline, with the Irish, Portuguese, Italian, and Spanish 2-year notes falling sharply, trading at yields of 5.731 percent, 7.025 percent, 3.433 percent, and 4.001 percent, respectively.

Clinging on to its gains ahead of the Greek news, the Australian Dollar is the top performer on Tuesday, gaining 0.04 percent against the US Dollar. The New Zealand Dollar has been the weakest performer (and has been leading the commodity block lower, I might add), with the NZDUSD depreciating by 0.66 percent. The EURUSD is also weaker, as expected, trading down 0.45 percent. 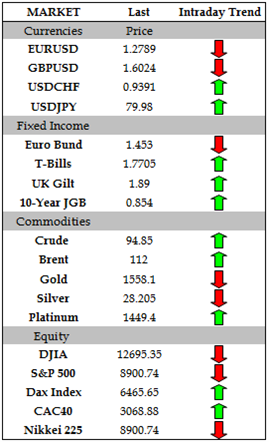 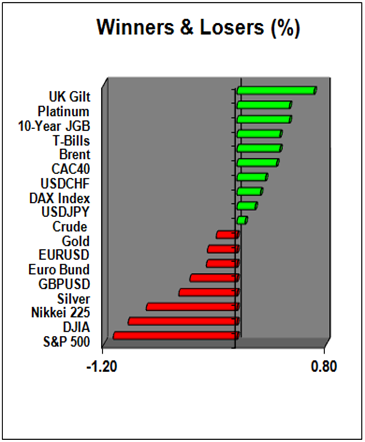 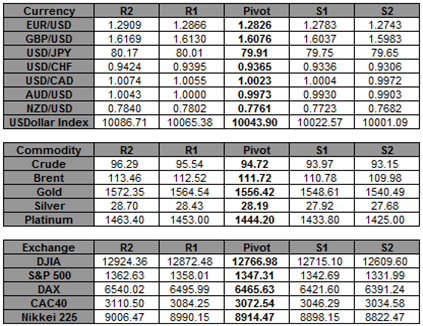