EURUSD Drops to Lowest Level Since Mid-January as Yields Spike

What is the biggest problem in the market right now: Is it the Chinese growth picture? Is it the Euro-zone growth picture or the Greek political impasse? Or is it the Federal Reserve’s outlook for the US Dollar? In a sense, there is only one link that unifies these three macroeconomic issues: uncertainty. Uncertainty – a lack of clarity, having little knowledge of “known knowns” with deep fears of “unknown unknowns,” however you want to describe it – is what’s driving the Euro’s fastest rate of depreciation in over a month.

When considering how great this uncertainty is, one needs to look no further than this weekend to understand how shaken investors have become. The People’s Bank of China cut their reserve-requirement ratio (RRR) by 50-basis points on Saturday, reducing their key rate from 20.50 percent to 20.00 percent. Historically, when this has happened, the commodity currencies have rallied sharply in the ensuing trading sessions, with the Australian Dollar benefiting the most (the last time the RRR was cut, the weekend of February 18, the AUDUSD opened up the next week approximately 100-pips higher). However, this was not the case; in fact, the AUDUSD opened up slightly lower as US Dollar demand has soared amid the uncertainty surrounding the market.

With that said the information that market participants do know is not conducive to an atmosphere of risk-appetite. Greece’s political situation is gridlocked with recent polls suggesting that Syriza, the left-wing anti-bailout party, would receive the most amount of support should another round of elections be announced. This in turn has raised concerns that Greece could leave the Euro-zone entirely, as European leaders have made it clear that if Greece reneges on any of its commitments, then the country won’t receive anymore funds. German Chancellor Angela Merkel hasn’t helped soothe investor sentiment, saying today that Greece will “always” remain as an European Union member, a sign that she believes that Greece may not always be part of the Euro-zone.

Taking a look at credit, the flight to safety is in full throttle, with the US 10-year Treasury Note yield falling to 1.771 percent; its German counterpart saw its yield drop to 1.438 percent. Euro-zone funding concerns are most evident on the shorter-end of the curve, with Irish, Italian, Portuguese, and Spanish 2-year note yields soaring: these yields climbed to 5.200 percent, 3.289 percent, 6.831 percent, and 3.894 percent, respectively. To this end, Irish and Spanish 2-year notes are trading at their highest yield (lowest price) in over three-months.

The Japanese Yen has been the top performer, gaining 0.24 percent against the US Dollar. The British Pound has been exceptionally resilient, gaining 0.02 percent as well as the Sterling is benefiting from haven flows and a relatively hawkish central bank. The Euro has underperformed broadly, with the EURUSD shedding 0.67 percent and trading to its lowest level since January 18. 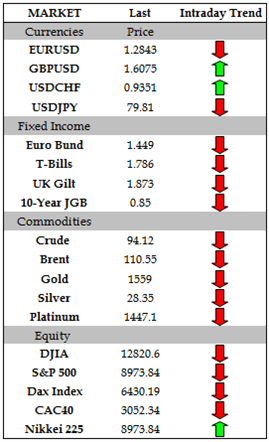 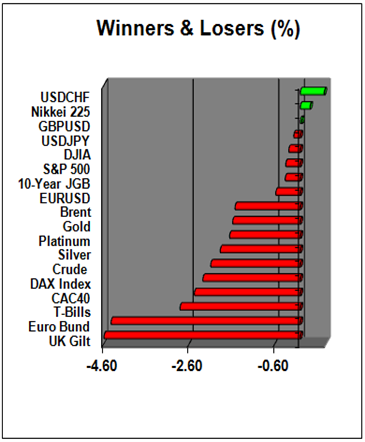 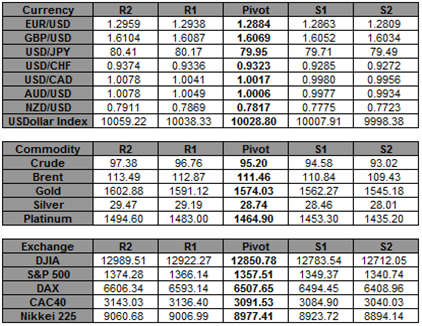