Australian Dollar, Euro Back at Monthly Lows as Dollar Surges

Yesterday’s price action was very telling. Typically, Europe has been the most important trading session of the day: this is when the market has been most liquid; and the region is the epicenter of the sovereign debt crisis. So when European equity markets rally and bond prices fall, there’s been a clear path paved for a continuation of the rally when US cash equity markets are the only ones open. Here at DailyFX, we often say (in jest) that one should buy risk-correlated assets after European markets close because trading during the US session thereafter often yields a slow, churning melt-up in equity prices. That’s why yesterday’s price action was so intriguing.

Whereas European markets rallied throughout Thursday, US equity markets did not take the torch and instead, sold-off slowly through the close. Thus, when J.P. Morgan broke the news of a major trading loss, it was as if market participants were already aware of the news. But J.P. Morgan’s debacle raises various questions that need to be answered if we are to have the ability to accurately assess the financial crisis: if J.P. Morgan, one of the nation’s most secure banks (according to the Federal Reserve’s stress tests) is undertaking these risky activities and accruing these losses, what does this say about the more desperate banks, Bank of America and Citigroup? If banks are undertaking these kinds of risks, how can anyone say that lending is back to its full capacity? Furthermore, if banks fail in their efforts to rebuild their balance sheets, what will the Federal Reserve do? Could we see another bank recapitalization program? If not, what happens to the US housing market? Of course, anything said in response is pure conjecture, but it’s very obvious that the US financial system is not as well-regulated as before, and now we’re likely to see a backlash from Washington in the form of the Volcker Rule (which I vehemently support).

Moving back across the pond, the European crisis continues to marinate, in that we’ve seen no new negative developments and certainly no new positive developments. Still, no news is bad news, because it means that no action is being taken to boost investor confidence. Earlier, Greek Prime Minister Lucas Papademos said that he had no interest in remaining prime minister, if Greece headed back for elections. Greece’s political climate is increasingly unstable, and the longer this game of ‘political chicken’ continues among the New Democracy, PASOK, and Syriza parties, the more likely Greek voters elect a more radical party, in my opinion, that would threaten the bailout and Greece’s inclusion in the Euro-zone.

The US Dollar has been the top performer on the day, gaining 0.35 percent against the next best performer, the Japanese Yen. The commodity currencies have led the decline, with the Australian and New Zealand Dollars depreciating by 0.86 percent and 0.63 percent against the US dollar, respectively. The Euro was also weaker, with the EURUSD dropping by 0.41 percent. 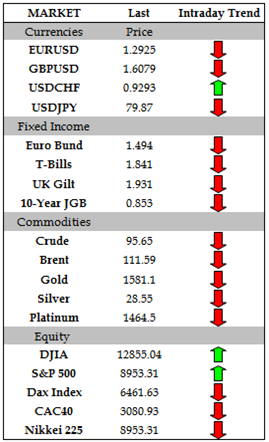 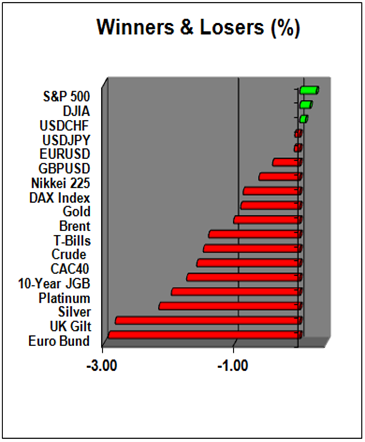 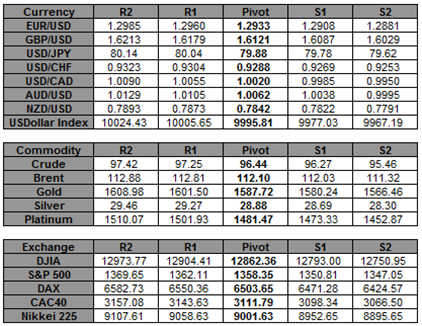