Despite Weak Chinese Data, Dollar and Yen Sold-off in Favor of Aussie

- Bernanke Gets 75% Approval from Investors in Global Poll – Bloomberg

- Pressure on the Euro – WSJ

With little negative news out of Europe, market participants happily dumped their holdings of the Japanese Yen and the US Dollar in favor of higher yielding currencies, such as the Australian Dollar, in the Asian and overnight sessions. The big data prints last night came revolved around the Australian Dollar, which is, accordingly, the top performing major currency on the day. However, upon a closer examination of the data, it’s evident that significant concerns remain and that the Aussie could very well fall back in the coming sessions.

First, the Australian labor market reading for April showed that the economy gained 15.5K jobs, well-above the median forecast of -5.0K, according to a Bloomberg News survey. On first glance, the better than expected figure appears to be a continuation of the labor market’s gains in March; however, a closer examination shows that there are issues with the print. Primarily, the composition of the report – whether or not the jobs added were full-time or part-time – suggested that gains may be short-lived. Full-time jobs fell by 10.5K while part-time jobs jumped by 26.0K, while the March figures were revised lower for both categories. To this end, last month’s headline figure was revised down to 37.6K from 44.0K. Finally, the participation rate dropped to 65.2 from the initial 65.4 reading in March, which helped drag down the unemployment rate to 4.9 percent from 5.2 percent. The takeaway is clear: the Australian labor market is shifting away from saturation, and in fact, Australian citizens are leaving the labor force. These are problems economists raise about the US labor market recovery and I believe that same attitude is applicable here. Ultimately, I find that the Reserve Bank of Australia will cut its key interest rate by another 25.0-basis points at its June meeting.

The next batch of data influencing the Australian Dollar was the Chinese trade balance figure for April. Like the Australian labor market print, this reading was another wolf in sheep’s clothing. While the headline balance showed a $18.43 billion surplus – nearly double the forecast of $9.90 billion – it comes on a breakdown of the internal dynamics of the report. Exports gained 4.9 percent year-over-year against an expectation of 8.5 percent, while imports collapsed, diving to 0.3 percent y/y against an expectation of 10.9 percent. Thus, while a bigger surplus is shown, it’s only due to the collapse of domestic demand. This in turn hurts China’s trade partners, such as Australia and New Zealand, as it means Chinese consumers are purchasing fewer Australian and New Zealand Goods.

Overall, while the Australian Dollar has rallied on these prints, the internal metrics are poor and suggest that these economies are showing signs of stress. Once market participants ‘get over’ the headline figures and begin to examine the other components, I expect the Australian Dollar to pullback sharply and move below parity. A stronger than expected April consumer price index print out of China tonight (3.4 percent y/y expected from 3.6 percent in March) could be the necessary catalyst to sink the AUDUSD below parity (a strong CPI suggests that the Chinese economy is experiencing a small bout of stagflation, in which policymakers can’t loosen monetary policy further to aid growth as inflation would surge further).

Taking a look at credit, stress has eased, if only momentarily, in the European periphery, with Italian and Spanish 2-year notes dropping to yields of 2.904 percent and 3.482 percent, respectively. Irish 2-year notes are the worst performer, whose yield has pushed higher to 5.006. On the longer-end of the curve, Portuguese 10-year bond yields have dropped by 25.8-bps to 10.718 percent, with Greek 10-year bonds underperforming dramatically, with the yields gaining 69.5-bps to 23.460 percent.

The Australian Dollar has been the top performer on the day, gaining 0.75 percent against the US Dollar following today’s data. The commodity currencies have broadly rebounded, with the Canadian and New Zealand Dollars appreciating by 0.23 percent and 0.51 percent. The Euro is stronger as well, with the EURUSD gaining 0.29 percent. The Japanese Yen trailed with the USDJPY rallying 0.33 percent. 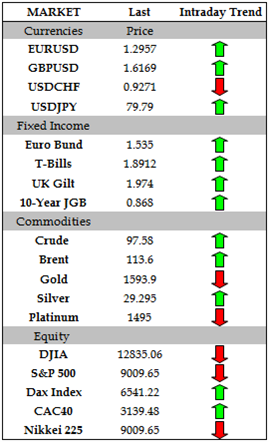 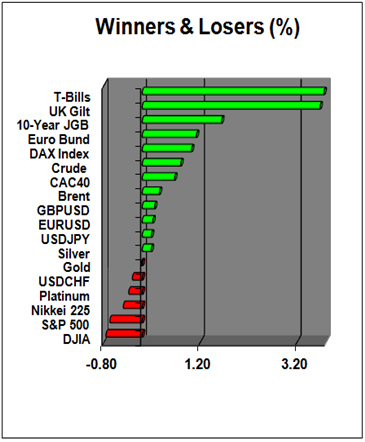 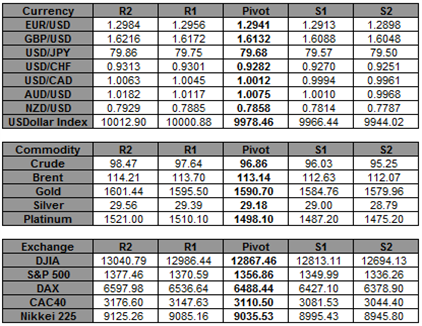