Higher yielding currencies and risk-correlated assets were under pressure throughout the overnight sessions, with the main downturn coming during the Asian session while European traders essentially tread water, if not pushing risk lower, ahead of the US cash equity open in New York. As firms try to raise capital amid an accelerate breakdown in the Euro-zone sovereign debt crisis, commodities have been sold-off alongside higher yielding currencies, such as gold and the Australian Dollar.

The Australian Dollar, the day’s worst performing currency, was hit particularly hard earlier today after Prime Minister Julia Gillard called to return the budget to a surplus in order to give the Reserve Bank of Australia more room to ease. A stronger fiscal policy, she noted, would give the RBA “maximum room” to shift monetary policy and help exporters struggling with an elevated Australian Dollar. The prime minister’s position here is clear: shift the burden of helping the economy from the government to the central bank; this in turn should yield another rate cut in the coming months. In fact, Credit Suisse Overnight Index Swaps are now pricing in a 90.0 percent chance of a 25.0-basis point rate cut at the policy meeting in June.

In regards to the European crisis, it’s evident that concerns raised in this column since last summer have been vindicated: a lack of structural reforms would place a large burden on the public; a deterioration in the standard of living leading to social unrest; social unrest leading to the rise of fringe political parties, likely cultivating a demagogue who would upset the established ruling political clash (enter Alexis Tsipras, head of Syriza); and the shift in power would result in a serious discussion about the country leaving the Euro-zone. Greece is close to this point; they have the necessary ingredients. By no means is this a victory lap, but rather, a reminder that the social consequences of the debt crisis should never be forgotten or disrespected. Considering how markets have responded since the French and Greek elections on Sunday – equity markets have tumbled, Treasury yields have sunk, the Japanese Yen and the US Dollar have rallied significantly – it’s evident that market participants aren’t considering the longer-term political consequences of the debt crisis. What does this mean? There’s a lot more room to the downside if the situation progresses at its current pace because very few are prepared.

Taking a look at credit, contagion is certainly spreading in the Euro-zone periphery, with shorter-term funding costs rising sharply today. Italian and Spanish 2-year notes dropped by 12.7-bps and 32.6-bps, respectively, with their yields rising to 2.968 percent and 3.530 percent. Amid this shift, capital has shifted into safer government debt, in particular into German Bunds and US Treasuries.

The Japanese Yen has been the top performer on the day, gaining 0.35 percent against the US Dollar, which is very reminiscent of how the USDJPY performed during the height of the Euro-zone crisis last fall. The EURUSD is also weaker, having depreciated by 0.48 percent and holding below 1.30. The Australian Dollar was the worst performer, shedding 0.78 percent to the US Dollar. 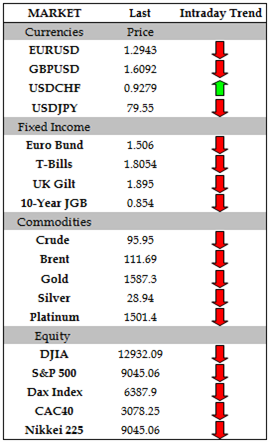 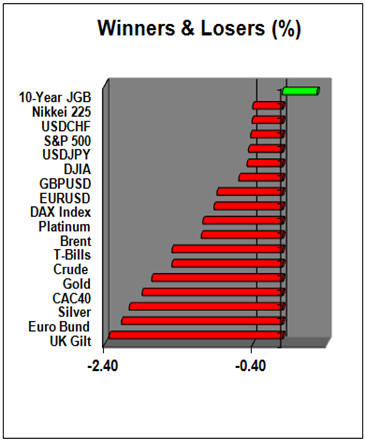 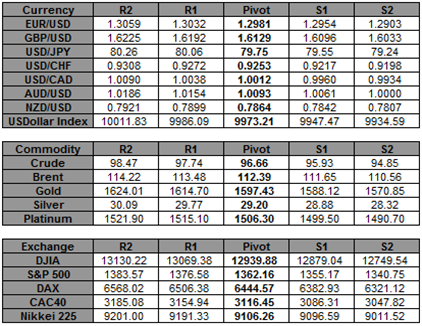