The first 90-minutes of trading after the US nonfarm payrolls report this morning yielded little positive price action for the US Dolllar: it depreciated against the European currencies and the Japanese Yen. However, the Greenback's strength was evident against the commodity currencies, a sign that concerns over global growth are starting to reheat after weeks of poor data forewarned of a slowdown.

Although the European currencies diverged from the commodity currencies shortly after the NFP report, those gains were quickly lost following the next round of concerns out of Europe headed into a critical weekend. Rumors came across the newswires that Spain's Banco Santander has requested another round of financing from the European Central Bank (via another longer-term refinancing operation) while a Greek official was quoted as saying that Greece could leave the Euro-zone, pending the outcome of the elections this weekend.

Whereas the EURUSD rallied after the NFPs this morning, within two hours, the pair had retraced all of its gains after the release on the rumors. In fact, the drop was more precipitous than the rally, in that there was no hesistation to shift capital allocation away for the Euro. The pair traded as high as 0.20 percent higher after the report, but at the time this report was updated, it was trading at 1.3089, 0.49 percent lower than yesterday's close.

Whether or not the events unfolding this weekend - the French and Greek elections - will have a material impact on market sentiment remains to be seen, of course. But what is known is that there's a growing distrust for the German model of fixing the Euro-zone; this is clear given the rise of far-right conservative and nationalist parties in the periphery nations, and now, France.

Market conditions were relatively quiet ahead of the hallowed nonfarm payrolls report, the United States’ reading of the labor market. Nevertheless, higher yielding and risk-correlated assets generally traded lower in the overnight sessions, with the US Dollar among the top performers midway through the European session.

However, the nonfarm payrolls report threw another wrench in the US Dollar’s rally. The 115K print versus the 160K forecast brings about the second consecutive month of disappointment, setting up the Japanese Yen for another push higher. The April reading was relatively less disappointing, showing jobs growth slowed by 4.2 percent from March to April; the March reading showed that jobs growth slowed by 53.7 percent from February to March. Generally speaking, it’s of my belief that this is the continued kickback from the unseasonably warm winter experienced across much of the United States this year, and that jobs growth should return to the 160K to 200K range the next few months ahead of the November elections.

In what has been little discussed in the wake of the report has been the dip in the unemployment rate, which fell to 8.1 percent in April from 8.2 percent in March. Clearly, this has nothing to do with the NFP print, but rather, the dip in the participation rate. The United States’ labor force participation rate fell to its lowest level since 1981 at 64.3 percent. This is starting to pose an enormous structural problem for the country that’s supposed to be the global growth engine. If more Americans are out of the work force, aggregate disposable income in the economy will be lower; considering consumption accounts for approximately 70 percent of the headline GDP figure, and a drop in disposable income will hurt growth. Put another way: if this trend continues, the Federal Reserve will have all the evidence they need for another round of quantitative easing.

Taking a look at credit, it’s clear that the poor labor market reading has stoked a major shift to safety, especially in the form of German Bunds and US Treasuries. The German 10-year Bund yield dropped to 1.584 percent today, while the US 10-year Treasury Note yield fell to 1.886 percent. On the shorter-end in Europe, there’s been an improvement in the Italy, French and Portuguese 2-year notes, while the Irish and Spanish 2-year notes saw their yields climb, with the former’s hitting a fresh three-month high (in terms of yield, three-month low in terms of price.

The Japanese Yen has been the top performer thus far on Friday, with the USDJPY depreciating by 0.40 percent. The commodity currencies have been weaker overall as well, with the Australian, Canadian, and New Zealand Dollars shedding 0.70 percent, 0.45 percent, and 0.61 percent, respectively, against the US Dollar. The EURUSD was little changed on the day, up 0.04 percent after NFPs. 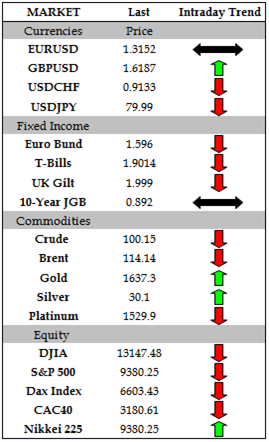 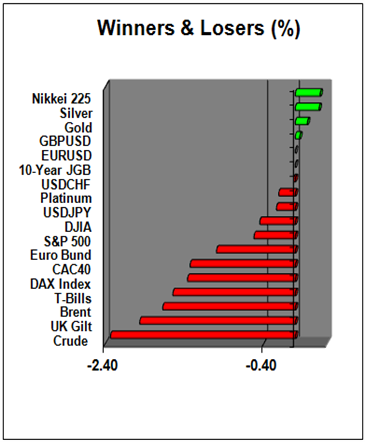 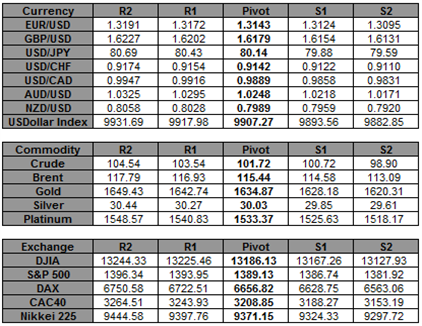