Volatility is starting to pick back up. Volume has been light the past few days given the holidays across Asia and Europe, which has yielded tighter ranges despite significant developments on the economic front across the globe the past few days. However, Wednesday’s price action, especially during the European/New York crossover session, has taken on a more familiar feeling as liquidity has started to come back into the market.

With that said, the return of European liquidity hasn’t been positive for higher yielding currencies and risk-correlated assets. European traders have sold off the commodity currencies as global PMI data continues to disappoint overall (there have been some bright spots but the negative has outweighed the positive here) while the Australian Dollar has been hit hard the past few sessions following the Reserve Bank of Australia’s surprise 50-basis point rate cut yesterday.

To me, the big news out of Europe, one that has had a material impact on intraday trading today, is that the Euro-zone’s unemployment has broken to a fresh 15-year high. This comes as the German economy saw its unemployment rate tick up to 6.8 percent after the economy shed 19K jobs in April. The slow deterioration of the German labor market is collateral damage from slowed growth out of Germany’s major trading partners, mainly those within the Euro-zone itself. The poor print coupled with worse than expected Euro-zone PMI revisions has battered market confidence – market participants now turn to the European Central Bank tomorrow to see if new measures are unveiled at their monthly policy meeting.

Taking a look at credit, Greek, Italian, and Spanish 10-year bonds are trading sharply lower on the day, whose respective yields have risen to 19.882 percent, 5.533 percent, and 5.819 percent. On the shorter-end of the curve, Portuguese, Irish, and Spanish debt has continued to weaken, with the Portuguese 2-year note falling 15.4-basis points to a 6.840 percent yield.

Overall, the US Dollar was the top performer on the day, gaining 0.62 percent against the worst performers, the Euro and the Swiss Franc. The commodity currencies were weaker as well, with the Australian, Canadian, and New Zealand Dollars shedding 0.23 percent, 0.24 percent, and 0.49 percent, respectively, against the US Dollar. The Japanese Yen was the next strongest, down 0.10 percent. 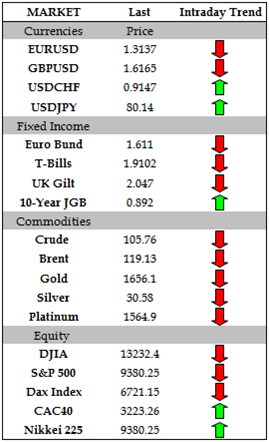 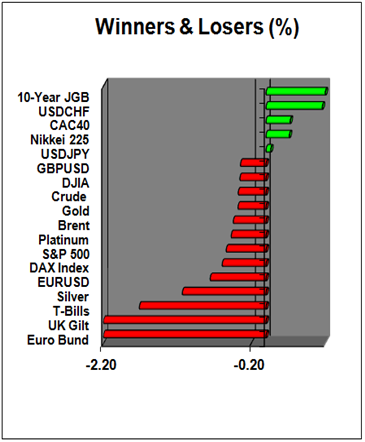 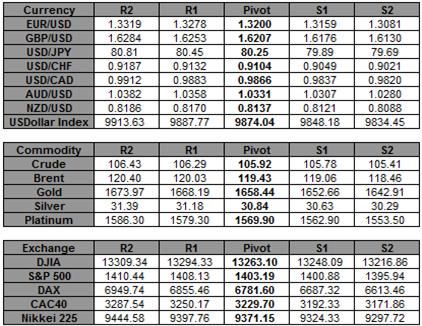