- Bonds Prove Only Winners for First Time since 2008 – Bloomberg

The past 24-hours have been rather quiet, almost too quiet in light of recent volatility surrounding major data prints out of Europe and the United States. However, considering that both Asian and European markets are mostly closed for holidays this week, liquidity has been thinner thus ranges have been smaller. With that said, the Reserve Bank of Australia’s surprise 50-basis point rate cut earlier today stoked immense volatility especially in the Australian Dollar, which was the worst performing major on the day.

It is also worth noting that today marks the beginning of May, so there are some seasonal trends to take into account when considering how the market will perform in the coming days. Using the S&P 500 as a proxy to broader equity markets, since 1950, May has averaged a gain of 0.24 percent. Recently, in May 2010 and 2011, the S&P 500 lost 8.2 percent and 1.4 percent, respectively. Needless to say, May 2012 may again yield “sell in May and go away” as it has each of the past few years.

Taking a look at credit, it is again worth noting that most Asian and European markets were or are closed today given regional holidays, so flows have been lighter and thus prices aren’t the ‘truest’ reflection of broader market participants’ sentiment. Using 2-year debt as a proxy for Euro-zone financial stability, we note that the PIIGS are generally weaker, with Ireland, Italy, and Spain underperforming on the short-end. The Portuguese 2-year note was remarkably strong in thin trading, whose yield fell by 38.7-bps to 6.705 percent.

Overall, the Swiss Franc was the best performing major currency against the US Dollar, appreciating by 0.27 percent. Following the RBA decision, the Australian Dollar was the worst performing major currency, dropping by 0.92 percent thus far on Tuesday. Overall, given the holidays in Asia and Europe, the rest of the majors were relatively unchanged versus the world’s reserve currency. 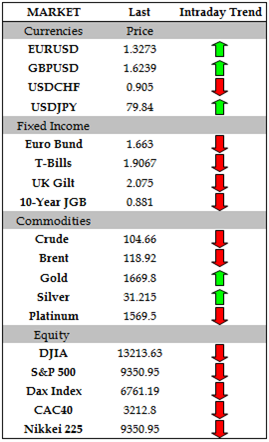 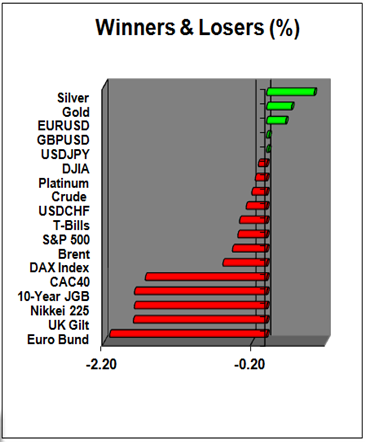 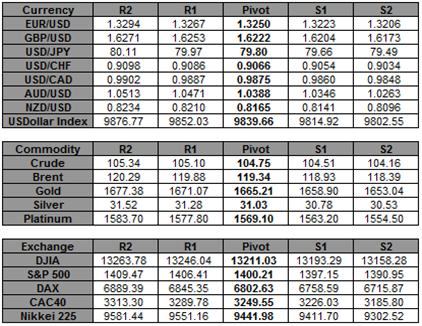