Japanese Yen Rebounds Sharply as US Dollar Slides after FOMC

In what has been an already volatile trading week, the Federal Reserve’s policy meeting yesterday threw a monkey wrench in conventional wisdom, stoking further rocky trading conditions in the overnight. While the US Dollar was easily the worst performing currency through the end of Wednesday, a surprise turn of events in Asia has elevated the Japanese Yen to its strongest single-day performance since April 10.

The Japanese Yen has found bids for good reason. Primarily, the Yen’s strength can be attributed to the widening differential between US Treasury Yields and Japanese Government Bonds (JGBs). How did this happen after a relatively hawkish Federal Open Market Committee policy decision and upgraded economic forecasts? Chairman Ben Bernanke took to the podium to tout the Fed’s message that “should the economy require that additional support,” the Fed still has scope to implement a number of tools to attempt to loosen monetary policy further. This message was perceived as dovish, meaning that the Fed is showed its intention to keep bond yields depressed for the foreseeable future.

On top of Treasury yields falling under pressure thanks to a mindless reaction by the markets – the Fed has clearly signaled that it will only intervene if the economy gets worse, so for the markets to rally is essentially hoping for the economy to stall – rumors emerged that the Bank of Japan was not going to introduce new stimulus measures at its policy meeting on Friday. If this is the case, it is likely that the Yen remains among the top performers in the periods ahead, as the safe haven currency has been under pressure the past week-plus on rumors the BoJ was readying to intervene again.

Taking a look at credit, periphery Euro-zone debt is under pressure once more, especially among the PIIGS save Portugal, whose 10-year bond yield continued to fall, now down to 10.653 percent, holding near its lowest yield over the past six months. Arguably the more important yields to follow in light of the European Central Bank’s two longer-term refinancing operations (LTRO), Italian and Spanish 2-year notes were the worst performers on the day, as their respective yields rose to 3.214 percent and 3.177 percent.

Overall, the Japanese Yen was the best performing major currency against the US Dollar, climbing by 0.67 percent. The Canadian Dollar was the worst performing major currency, shedding a mere 0.04 percent thus far on Thursday. Overall, the majors traded in narrow ranges versus the world’s reserve currency, with the Australian Dollar, the second best performer, only gaining 0.16 percent. 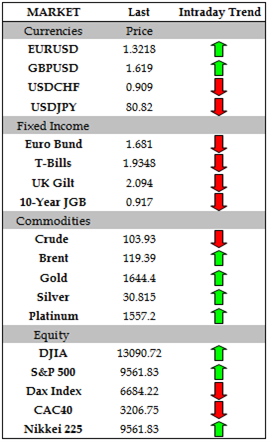 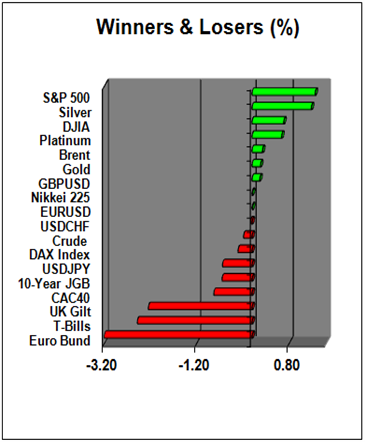 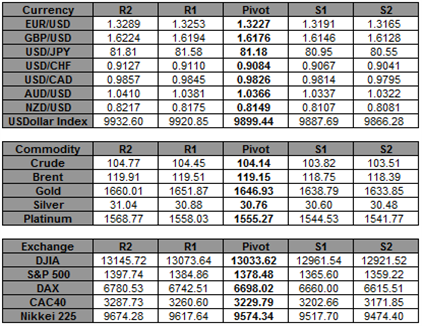