- Sarkozy Woos Far Right after Hollande Wins Round One – Reuters

Event risk was rather high over the weekend as the International Monetary Fund completed its quest to beef up its funding pool and the first round of the French presidential elections. In terms of the former, the IMF received more than $430 billion in fresh funding from the G-20, while the BRICS – Brazil, Russia, India, China, and South Africa – have pledged an undisclosed amount to be discussed going forward. While the additional funding adds more cushion to the “save Europe” fund, it does not directly affect the pressures influencing periphery nations funding costs, so there’s little that can be done with that additional funding besides provide a security blanket, for now.

In terms of the French presidential elections, incumbent Nicolas Sarkozy lost the first round to Socialist challenger Francois Hollande by a count of 28.6 percent to 27.1 percent. While both move on to the second and final round, the strong performance by Marine Le Pen (nearly 20 percent of the vote) raises issues about the sentiment around French voters; Le Pen is seen as the far-right, almost nationalist candidate. If the French demographic is indeed shifting to the far-right, it’s likely to hurt President Sarkozy’s chances of getting reelected but more importantly, it suggests that the French public is becoming disenchanted by the notion of solidarity in Europe.

Data was also disappointing over the weekend, with inflation data from Australia and purchasing manager indexes from Europe disappointing market participants early in the last full week of April. The Australian producer price index showed quarterly deflation for the first time the fourth quarter of 2009, all but confirming that the Reserve Bank of Australia will cut its key interest rate at its meeting next week. The Euro-zone PMI data was disappointing across the board, with steeper contractions in each of the French, German, and broader Euro-zone manufacturing composites. This strengthens my view that the Euro-zone is in the early stages of a severe recession.

Taking a look at credit, flows were smaller relative to their recent levels so the pricing of European sovereign debt appears to be disjointed today. On the longer end of the curve, Italian and Spanish 10-year debt weakened, with their respective yields rising to 5.680 percent and 5.928 percent. The German 10-year Bund was among the top performers, whose yield dropped to 1.650 percent. Funding pressures on the shorter end of the curve were evident as well, with the Italian and Spanish 2-year notes falling by 6.6-basis points and 7.7-bps, respectively, to 3.243 percent and 3.449 percent. 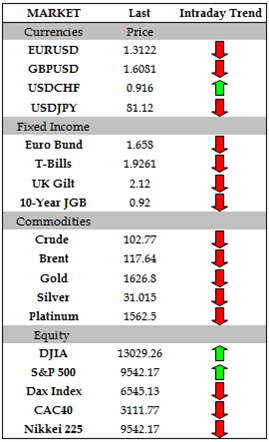 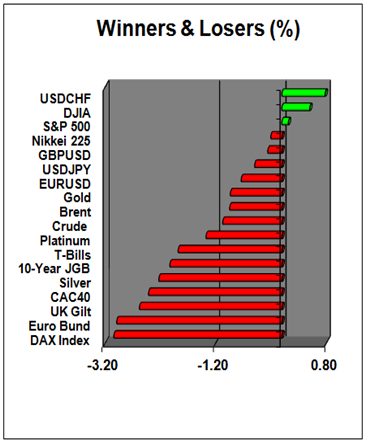 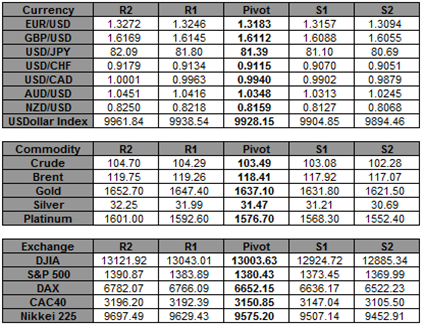