While price action in the Asian session was clearly constructive and supportive of risk-positive sentiment, European traders brought a different attitude to work on Wednesday and the progress made by higher yielding currencies and risk-correlated assets was soon wiped out. The biggest moves come from the British Pound and the Japanese Yen, which, like the Canadian Dollar, have seen some indications of significant policy moves in the coming months from their respective central banks.

In terms of the Japanese Yen, it was the weakest major currency midway through the Asian session by a wide margin – the USDJPY had climbed by at least 0.60 percent – as Asian market participants seemingly rejoiced and chased the outstanding rally by the S&P 500 on Tuesday (its best in one month). The desire to trade in the low yielding currency for higher yielding assets was further supported after the Bank of Japan suggested that more easing may be necessary, even as the global economy shows signs of progress.

BoJ Deputy Governor Kiyohiko Nishimura’s comments that the BoJ is “committed to implementing additional easing measures, if deemed necessary” support recent technical moves by the USDJPY, which are starting to suggest that the USDJPY correction is finished and we’re set for the next major leg higher. If the BoJ is planning on implementing additional easing – seemingly ready to intervene at a moment’s notice – the Japanese Yen will weaken under the threat of this verbal intervention.

Like the Yen, the British Pound has been tossed around by market participants struggling to discern the direction of the Bank of England’s monetary policy. However, unlike the Yen which remains under pressure given the BoJ’s dovish stance, the Pound found significant support earlier in the day after the Bank of England minutes showed that Monetary Policy Committee member Adam Posen abandoned his stance for more easing. If the BoE is going to withdraw stimulus measures, or at least at the minimum attempt to communicate its desire to normalize monetary policy, the British Pound stands to gain substantially over the coming weeks.

Taking a look at credit, there is little rhyme or reason in the breakdown of how European sovereign debt has performed; Spanish debt is among the top performers while Italian and Portuguese debt have been the leading decliners. We now look to the 10-year Spanish bond auction tomorrow to see how confident market participants are in the Spanish government’s reforms.

Overall, the British Pound was the best performing major currency after the BoE minutes, gaining 0.32 percent against the US Dollar. All of the other majors fell against the US Dollar with the Japanese Yen and New Zealand Dollar leading the decliners, down 0.61 percent each. The Swiss Franc is also weaker, down 0.50 percent, after SNB President Thomas Jordan reaffirmed the SNB’s commitment to the EURCHF floor. 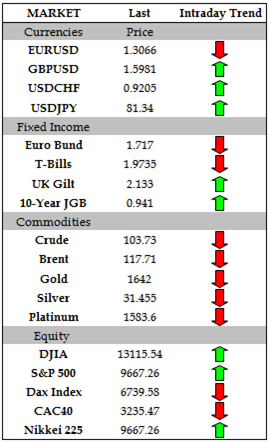 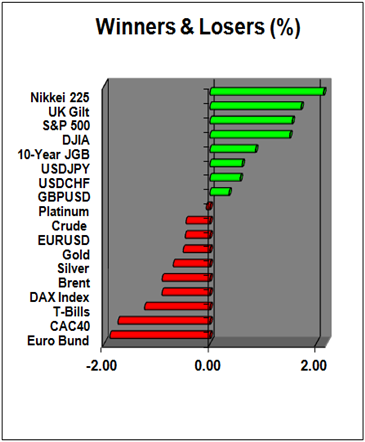 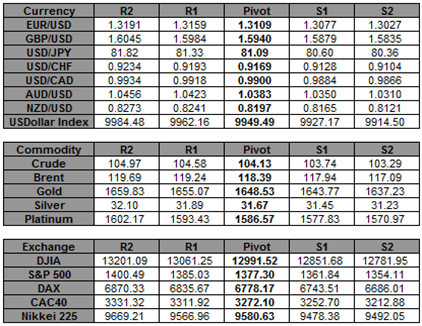