Euro Steadies After Spanish Auction While Loonie Rallies Ahead of BoC

- Demand for Spain’s T-Bills Jumps; So Does Price – WSJ

The past 24-hours have yielded some very interesting price action: the EURUSD traded below the 1.3000 exchange rate for the first time in two-months before a massive 1.18 percent intraday rally to pull the pair back above the 1.3100 level. The volatility was evident elsewhere: the S&P 500 traded in a 1.10 percent range on Monday (before closing down by 0.05 percent). If this marks the beginning of the return of general market volatility (the VIX Index has traded above the 20.00 level three of the last five sessions; the last time this occurred was from February 10 through 16), it couldn’t be coming at a worse time.

For much of 2012, market volatility has been constrained as concerns over the Euro-zone abated while the US economic picture strengthened to the point that some pundits were hailing the US economy as the “engine of global growth” for the foreseeable future. Market participants ran with this theme for the first two and a half months of the year as the S&P 500 touched its highest level in nearly three years while volatility was at its lowest levels since 2007.

As mid-March rolled through, economic data out of Spain began to disappoint expectations and since then, market participants have been increasingly jittery: the S&P 500 has dropped nearly 4 percent since its yearly high on April 2 while the VIX Index has surged by over 43 percent since its mid-March low. In recent days, concerns over Spain have mounted as funding costs for the country have risen. Today’s auction has helped stoke risk-appetite in the overnight sessions as Spain sold more than its maximum target at the sale; coupled with a stronger confidence reading out of Germany, the Euro-zone’s sovereign debt concerns are out of the picture, if only briefly.

Taking a look at credit, pressure on periphery Euro-zone debt has eased modestly, with Spanish debt leading gains (10-year bond yield -17.1-basis points). The PIIS (Greece excluded) were among the best performers among Euro-zone credit (Greek weakest, Spanish strongest), with the most notable outperformance evident in Italian and Spanish bonds, where their respective 10-year yields had fallen to 5.457 percent and 5.847 percent, at the time this report was written.

Overall, the Canadian Dollar was the best performing major currency (no coincidence ahead of the Bank of Canada rate decision), gaining 0.37 percent against the US Dollar. The Australian Dollar and the British Pound were also stronger against the US Dollar, up 0.14 percent and 0.31 percent, respectively. The Japanese Yen was the worst performing major, shedding 0.29 percent, at the time this report was written. 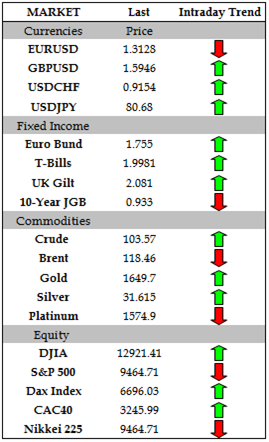 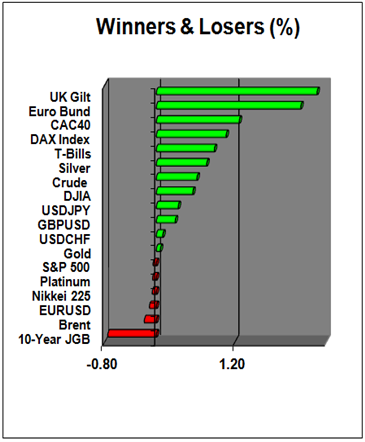 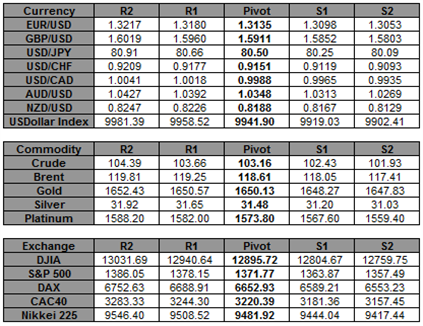