Euro Dips Below $1.30 versus US Dollar as Spanish Concerns Grows

While there’s usually a disconnect between Friday’s close and Monday’s open, market participants opened the new week just as they closed last: the sell-off that took place after the US cash equity session on Friday opened up to a wave of selling across Asia on Monday. Bearish sentiment started to snowball towards the end of the Asian session but, despite the catalysts of the recent downturn rooted in Europe, the start of European trading this week gave way to a rebound by higher yielding currencies and risk-correlated assets, such as the Australian Dollar and the Euro.

Still, despite most of the majors trading in relatively tight ranges versus one another, market participants have clearly begun to panic as evidenced by recent price action in the EURUSD. The 1.3000 exchange rate not only offers significant support on a technical basis, but from the behavioral analysis standpoint, it also represents a psychologically significant level that traders have looked to in recent months as a guideline to determine how serious the Euro-zone crisis is (when EURUSD trades > 1.3000, market participants are calmer; when EURUSD trades < 1.3000, market participants have been and are becoming increasingly skittish).

Thus, today’s price action by the EURUSD, which includes a dip below the key 1.3000 level, is indicative of how quickly the seams are becoming unwound in Europe. The slump today was spurred after Jaime Garcia-Lopez, a Spanish deputy minister in the Economy Ministry, said that the European Central Bank “should step up [its] purchases of bonds.” The ECB has kept its securities market program (SMP) quiet for a few weeks now, and as per data released today, it settled no government bond purchases last week. Spanish banks are becoming increasingly reliant on the ECB for funding, having borrowed over €300 billion in March alone. This panic is most evident in the bond markets.

Taking a look at credit, periphery Euro-zone debt is under a significant amount of pressure, with Greek debt leading losses (10-year bond yield +35.7-basis points). The PIIGS were the worst performers among Euro-zone credit (Greek weakest, German strongest), with the most notable underperformance evident in Italian and Spanish bonds, where their respective 10-year yields had climbed to 5.545 percent and 5.987 percent, at the time this report was written. 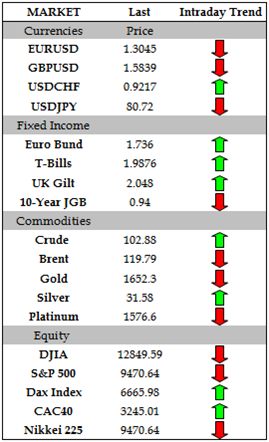 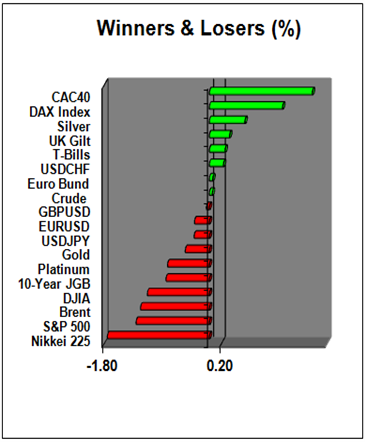 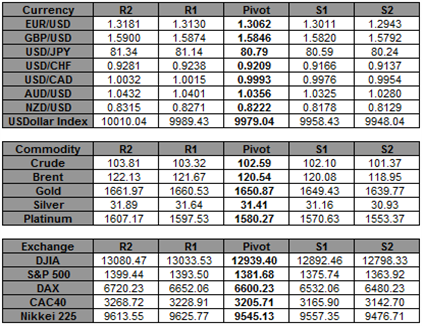