There was a significant amount of data out in the overnight but little market reaction was observed given the small magnitude of the releases; “quantity over quality.” Instead, market participants had their sites on two events ahead of the U.S. cash equity session: the Spanish bond auction and the European Central Bank rate decision. With the market primed for a risk-off day following the Federal Reserve’s minutes yesterday, it took little to tip the scales further and lead to steep declines in the overnight.

With regard to the aforementioned events, the Spanish bond auction today was the ‘meat’ of the concerns that led to declines by higher yielding currencies and risk-correlated assets earlier today. At the auction for medium-term debt today, Spain sold €2.6 billion of notes maturing in 2015, 2016, and 2020, decidedly worse than expected and at the low range of the €2.5 billion to €3.5 billion sales target. Spanish debt has been eroding the past month, with the 10-year bond moving from near 4.900 percent to as high as 5.560 percent earlier today.

In terms of the European Central Bank rate decision, President Mario Draghi and the Governing Council held the key rate at 1.00 percent, as expected. By no means is the ECB ready to unwind its stimulus, with President Draghi noting that any talk of an exit strategy is “premature.” In line with this, the ECB believes that inflation pressures will be constrained for the near-future, stating that “underlying price pressures should remain limited.” President Draghi also added that “all the necessary tools are available to address upside risks to price stability in a firm and timely manner.” This is outlook should have a negative impact on short-term rates, which is why the Euro moved lower amid the press conference.

Taking a look at credit, European sovereign debt is flashing red signaling a risk-off day in the markets. All of the major periphery countries’ debt (Portugal, Ireland, Italy, Greece, and Spain) has declined on the day, and worse, they have all widened relative to their German counterpart. The worst performer, aside from Greece, is the Portuguese 10-year bond, whose yield climbed to 11.546 percent today. On the back of the aforementioned Spanish bond auction, the Spanish 10-year bond yield soared to 5.588 percent. Similar weakness was evident in Italian debt as well.

Overall, the Japanese Yen is the top performer on the day, gaining 0.51 percent against the U.S. Dollar, at the time this report was written. Ahead of the ECB rate decision and press conference, today had the makings of a classic risk-off day in the currency markets: out of the commodity currencies first, then the European currencies, and finally into the U.S. Dollar and the Yen. Following the ECB’s press conference, the Euro was the worst performer on the day, losing 1.31 percent to the Yen and 0.85 percent to the U.S. Dollar. As expected, the Swiss Franc was matching the Euro’s weakness, with the USDCHF gaining 0.75 percent on the day so far.

Speaking of the Franc, it is worth noting that as the EURCHF approaches the 1.2000 currency floor (currently trading at 1.2034), rhetoric from the Swiss National Bank is expected to sharpen to discourage speculators from shorting the Franc. The SNB’s acting President, Thomas Jordan, has pledged to defend the floor at “all costs” and all indications are that the SNB will have to raise the EURCHF floor at some point in the coming months, to at least 1.2500 or 1.3000 (lobbyists and politicians alike have called for a 1.4000 floor). A move to strengthen the EURCHF would consequently be USDCHF positive as well. 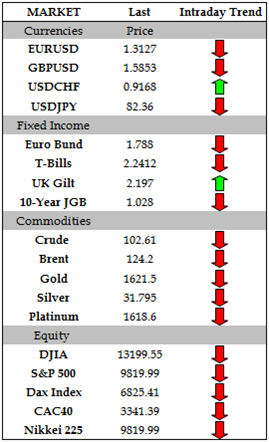 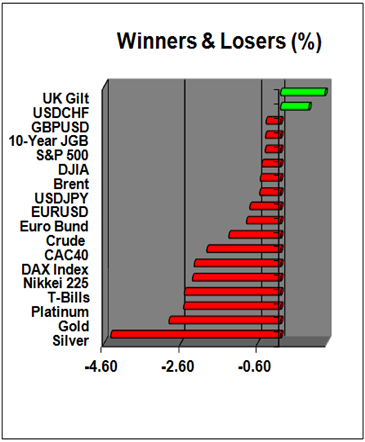 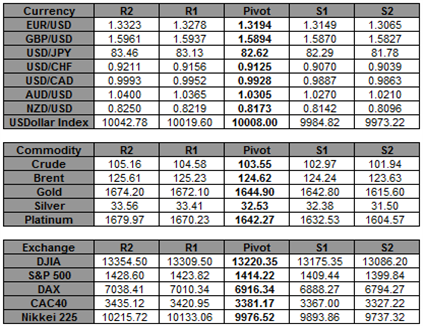