Price action in the Asian and European sessions was very interesting, especially considering it is the start of the quarter. The start of the quarter, typically, is positive for risk-trends as market participants cycle capital back into the market as new positions are taken up. Trading in Asia appeared to be the start of this move: the AUDJPY was up over 1.20 percent at one point early Monday. Better than expected Chinese PMI manufacturing data for March suggested that recent fears of a Chinese slowdown have been overblown, but a conflicting private sector measurement quickly dispersed of any such notion, it seems.

Accordingly, despite the massive gap open higher by higher yielding currencies and risk-correlated assets, any gains had been erased by the U.S. cash equity open on Monday as the Japanese Yen outpaced all of its major counterparts. The Yen’s strength comes at a quizzical time, as the end of March and the beginning of April have seasonally shown to be periods of relative weakness.

Weak PMI manufacturing data out of the Euro-zone didn’t help risk-sentiment, as the slightly better than expected readings out of Germany and Italy did little to offset the disappointing French print, with all three gauges suggesting that manufacturing activity across the region continues to contract. Soft economic data out of the Euro-zone has been expected for quite some time, and with the recent wave of austerity that has hit the continent, further disappointing growth readings are expected.

Taking a look at Asian and Oceanic credit, the Chinese PMI data’s influence extended beyond the currency markets and into the bond markets, where both the Australian and New Zealand 10-year yields have risen, to 4.122 percent and 4.252 percent, respectively. Japanese 10-year JGBs fell as well, now yielding 1.003 percent. Moving onto Europe, periphery debt was scattered but mostly to the downside. While Italian and Spanish 10-year bonds barely gained a half of a basis-point, Portuguese 10-year bond yields fell rose back to 11.125 percent.

Overall, the Japanese Yen was the top performing currency, up 0.74 percent against the U.S. Dollar, at the time this report was written. The commodity currencies were still bid up across the board following the Chinese PMI print, with the Australian, Canadian, and New Zealand Dollars appreciating by 0.43 percent, 0.13 percent, and 0.20 percent, respectively, against the U.S. Dollar. The Euro-zone PMI figures weighed on the European currencies (despite the stronger prints out of Switzerland and the United Kingdom), with the Euro and the Swiss Franc leading decliners, down 0.40 percent each.

It is worth noting that as the EURCHF approaches the 1.2000 currency floor (currently trading at 1.2043), rhetoric from the Swiss National Bank is expected to sharpen to discourage speculators from shorting the Franc. The SNB’s acting President, Thomas Jordan, has pledged to defend the floor at “all costs” and all indications are that the SNB will have to raise the EURCHF floor at some point in the coming months, to at least 1.2500 or 1.3000 (lobbyists and politicians alike have called for a 1.4000 floor). 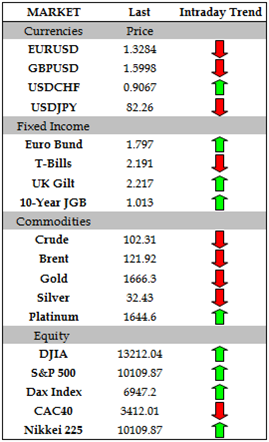 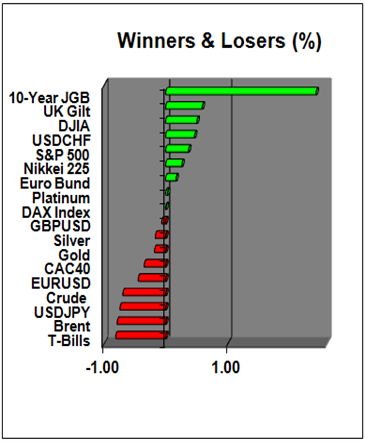 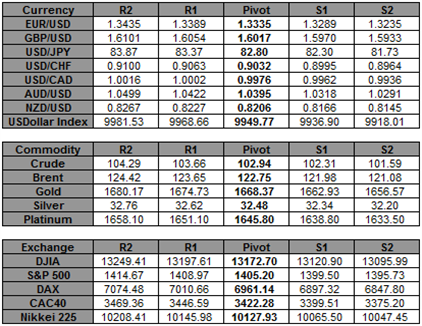