Higher yielding currencies and risk-correlated assets continued their tumble lower, with the commodity currencies, the Australian, Canadian, and New Zealand Dollars posting among the largest losses on Wednesday against the U.S. Dollar. Risk-aversion was the theme through-and-through, with the Japanese Yen coming in as the top performer ahead of trading in New York. This is an unusual occurrence given the seasonality of the Japanese Yen (more below), and perhaps is a sign of greater troubles brewing.

Taking a look at credit, the U.S. Dollar was getting a lift from slightly elevated Treasury yields, while European credit was broadly stronger across the board. The European Central Bank’s interference in the secondary bond markets continues, with the Portuguese 10-year bond dropping another 24.5-basis points to a 10.620 percent yield. Both Italian and Spanish 10-year bonds had improved as well, with their respective debt trading at 5.096 percent and 5.300 percent. The resiliency of periphery debt in recent weeks has been a significant contributing factor in supporting the Euro.

Although there was significant British and German data out in the European session, the most important release of the day came at 12:30 GMT, when U.S. durable goods orders were released for February. Orders were up by 2.2 percent last month, a strong improvement from the 3.6 percent contraction in January, marking the fourth monthly gain in the past five periods. Still, the 2.2 percent actual was a disappointment. According to a Bloomberg News survey, markets were looking for at least 3.0 percent growth.

Participants took the event as mostly negative, with the U.S. Dollar gaining traction across the board, save against the Japanese Yen, following the print. The AUDUSD and EURUSD both broke below key psychological levels, and barring dovish commentary from policymakers, risk-appetite is likely to remain under pressure.

Overall, the Japanese Yen, surprisingly, has been the top performer, gaining 0.19 percent against the U.S. Dollar (more on this in a moment). The Euro was the next best major, with the EURUSD up 0.08 percent. The other European currencies, the British Pound and the Swiss Franc were weaker, with the Sterling’s losses outpacing the Franc’s. The Australian Dollar has been mangled this week as growth concerns out of China weigh on investor sentiment, with the AUDUSD down 0.66 percent today and 1.34 percent the past two days. Still, with U.S. equity markets holding up, for the historical correlation between the AUDUSD and the S&P 500 to hold, either the Aussie will need to rebound sharply (implied 1.0775 at current S&P 500 level) or the S&P 500 will need to correct lower (implied 1310.00 at current AUDUSD level). 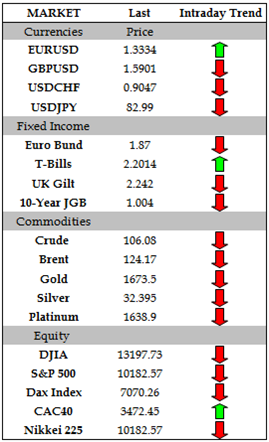 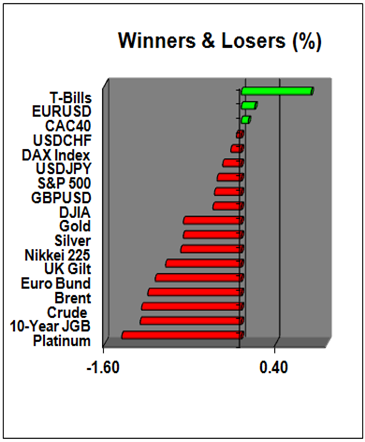 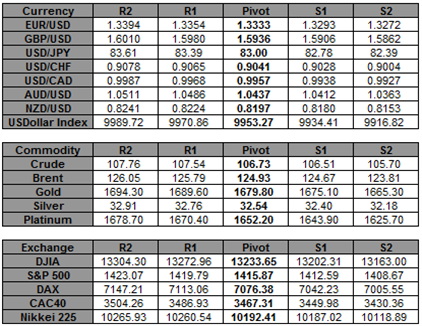