Higher yielding currencies and risk-correlated assets rallied for the second consecutive day on Monday following slightly better than expected data out of the Euro-zone. Following the German IFO’s survey, capital flows turned on a dime, with funds headed towards the commodity currencies and the Euro and away from the safe havens, the Japanese Yen and the U.S. Dollar. Even if there is a shift to risk-aversion this week, I expect the Yen to remain weaker as the end of March presents a unique opportunity: Japan’s fiscal year ends (more on this in a moment).

Compounding the bullish Euro-zone data and the seasonality effect on the Japanese Yen, Federal Reserve Chairman Ben Bernanke reignited hopes of a third round of quantitative easing, as expected. Ahead of U.S. equity markets opening, Chairman Bernanke said that the recent decline in the unemployment rate was “somewhat out of sync” with recent economic growth. He went on to say that "To the extent that this reversal has been complete, further significant improvements in the unemployment rate will likely require a more rapid expansion of production and demand from consumers and businesses, a process that can be supported by continued accommodative policies."

To me, this is a clear sign that the Fed is going to begin legitimately discussing another easing package as soon as the April meeting. I expect that if this is legitimate, we will need to see QE3 hopes “priced” back into the market, which should lead to a rally in higher yielding currencies and risk-correlated assets. Bottom line: Japanese fiscal year end and a more dovish Fed chairman should be bearish the Japanese Yen and U.S. Dollar the next two weeks.

Overall, the Australian Dollar was the top performing major currency in the overnight, appreciating by 0.73 percent against the U.S. Dollar. Similarly, the other commodity currencies, the Canadian and New Zealand Dollars, were up by 0.63 percent and 0.67 percent, respectively, at the time this report was written. The European currencies were up modestly as well, with the British Pound, the Euro, and the Swiss Franc gaining 0.46 percent each. The Japanese Yen was the only currency to underperform the U.S. Dollar on the day, with the USDJPY up 0.60 percent. 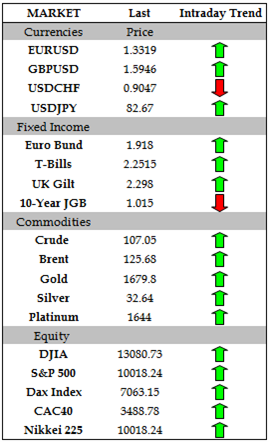 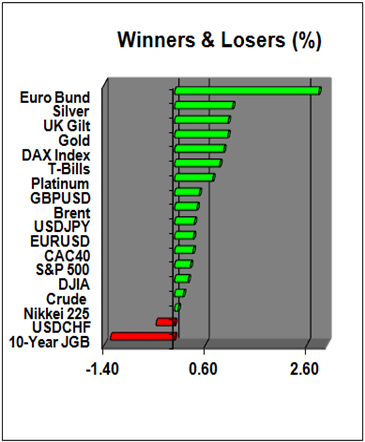 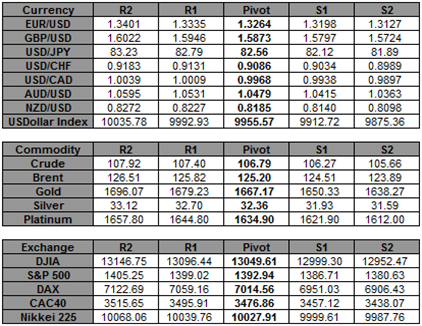