Risk sentiment has been badly bruised. Under pressure all week, the commodity currencies were beginning to stage a comeback in early Asian trading, ahead of the Chinese manufacturing report that would ultimately pull the rug from underneath the rally. This was just another nail in the risk sentiment coffin following a disappointing New Zealand gross domestic product print earlier in the session. As European funds hit the market, the sell-off continued, and European data did not help quell the fears of a global slowdown.

Are global macroeconomic trends finally starting to catch up to the market? It appears that way. As austerity measures sweep across Europe as the continent fends off a debt crisis that could shatter the union, growth prospects have dimmed as well. Aggregate purchasing manager index data for the Euro-zone showed a steeper than expected contraction in March in manufacturing and services, underscoring the belief that austerity will ultimately hurt short-term growth. This is just the tip of the iceberg, however, and concerns are increasingly evident in the credit markets.

Taking a look at credit, the flight to safety en masse took hold, with core sovereign debt strengthening across the board while periphery debt was under heavy pressure. The German 10-year Bund was the top performer, falling by 5.6-basis points to a 1.920 percent yield. The PIIGS were the worst hit, led by Greece and with Italy, Portugal, and Spain showing a substantial deterioration relative to their German counterpart. The Portuguese 10-year bond yield soared to 12.049 percent, while the Italian and Spanish 10-year bond yields jumped to 5.065 percent and 5.455 percent, respectively. As periphery debt comes under more pressure the question emerges: will the European Central Bank sit on the sidelines; or will the ECB consider a third liquidity program? For now, this option is off the table, but if credit continues to deteriorate, then it will be a reality by the third quarter of 2012.

Overall, the Australian and New Zealand Dollars were the worst performing majors, falling by 0.92 percent and 0.98 percent, respectively, against the U.S. Dollar. Likewise, underperformance was the theme across the commodity currencies as global growth prospects fade, with the Canadian Dollar dropping by 0.74 percent versus the Greenback. The weak data out of Europe hurt the European currencies as expected, with the British Pound, Euro, and Swiss Franc falling by 0.49 percent, 0.44 percent, and 0.41 percent. The top performer on the day was the Japanese Yen, which gained 0.49 percent against the U.S. Dollar, at the time this report was written. 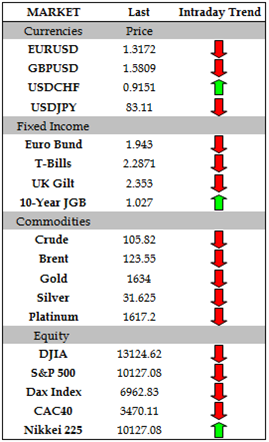 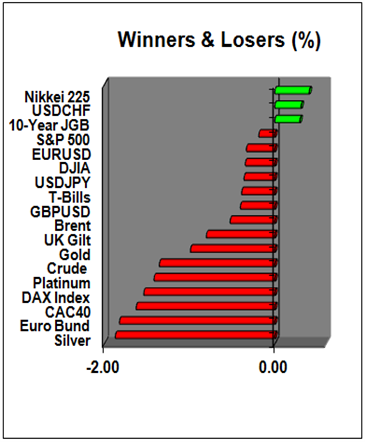 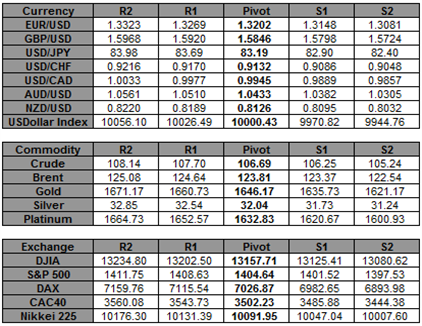