If Monday was supposed to set the tone for the week, Tuesday missed that memo. After holding to tight ranges yesterday, all of the major currencies took a turn lower against the U.S. Dollar in the Asian and European sessions. In fact, after the Reserve Bank of Australia’s minutes from their recent policy meeting were released, the Australian Dollar began its tumble for what has been its worst performing day since January 3.

However, it was not merely the RBA’s minutes that have led to the Aussie’s precipitous (and other risk-correlated assets, for that matter) decline in the overnight. Concerns out of China on growth prospects this year have boosted U.S. Dollar demand substantially. According to Bloomberg News, BHP Billiton Ltd. said that Chinese steel production is slowing, a sign that emerging markets may be facing headwinds.

Taking a look at credit, it’s evident that some concerns out of Europe are weighing on risk-appetite as well. Mainly, the German 10-year Bund rallied ahead of the North American open, with the yield falling to 2.035 percent. The Italian and Spanish 10-year yields climbed slightly, moving up to 4.862 percent and 5.181 percent, respectively. The outliers on the day are the performances of Portuguese bonds, which have strengthened substantially (the 10-year by 40.3-basis points); it’s clear that exogenous forces (i.e. the European Central Bank) are active in the market.

Overall, the Australian and New Zealand Dollars were the worst performing currencies, down 1.33 percent each, respectively, at the time this report was written. As noted earlier, this has been the worst performance by the AUDUSD since January 3. The Canadian Dollar was also under pressure on the Chinese concerns, losing 0.82 percent against the U.S. Dollar. The European currencies have held up nicely in the face of a stronger U.S. Dollar, with the Euro and the Swiss Franc down 0.08 percent each, while the British Pound was down 0.17 percent at the time of writing. 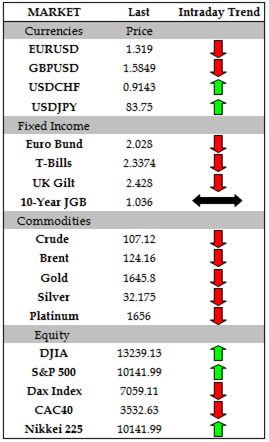 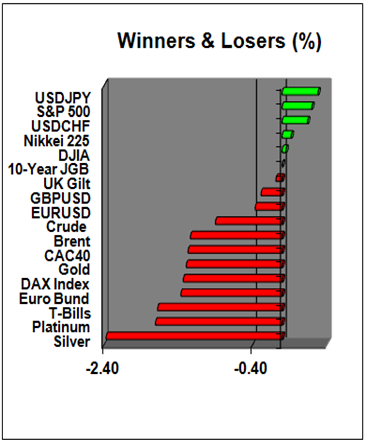 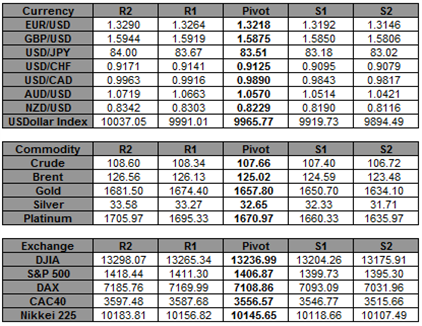