Price action was rather muted in the overnight, with the major currencies staying relatively tethered to their closing prices on Friday against the U.S. Dollar. Trading in Asia continued the U.S. Dollar beat down from Friday, when the world’s reserve currency was hit with another wave of quantitative easing hopes priced in by the market following the soft consumer inflation reading for February. With that said, any rallies predicated around the hopes of more easing are farfetched at this point, with the Federal Reserve holding back on announcing or even mentioning another round of easing in their rate decision last Tuesday.

There was little market moving data out of either Asia or Europe to start the trading week, and this trend will hold true as the docket is empty relative to its recent (over)saturation. With that said, it is likely that commentary from various global policymakers will heavily this week. To start, International Monetary Fund Managing Director Christine Lagarde offered cautious words on the recent uptick in data and rally by global markets, saying that “optimism should not give us a sense of comfort or lull us into a false sense of security.”

In response to the statements which could be viewed as risk-negative, the flight to safety was on in Europe, in both credit and currency markets (which explain the performance of the U.S. Dollar once London opened). Core credit showed a slight improvement, with the German 10-year Bond yield falling to 2.038 percent, or down 0.9-basis points. Similarly, the U.K. 10-year Gilt rebounded slightly back to 2.418 percent yield. The deterioration of U.S. Treasuries continued in early trading, with the 10-year Note yield rising to 2.323 percent. Higher Treasury yields are supportive of a stronger U.S. Dollar.

Overall, for the second consecutive day, the British Pound has been the top performer against the U.S. Dollar, gaining a slight 0.18 percent through the first session and a half to start the week (Asia and half of Europe). Generally speaking, the major currencies weren’t arranging in a typical risk-on, risk-off day: the Sterling, Canadian Dollar, and the Japanese Yen took top billing against the U.S. Dollar while the Australian Dollar posted the largest losses, followed by the Swiss Franc and the Euro. 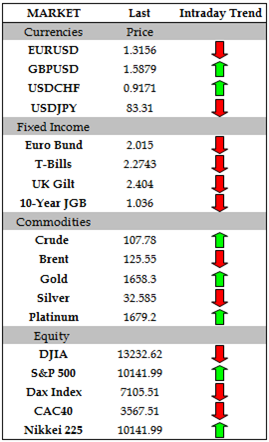 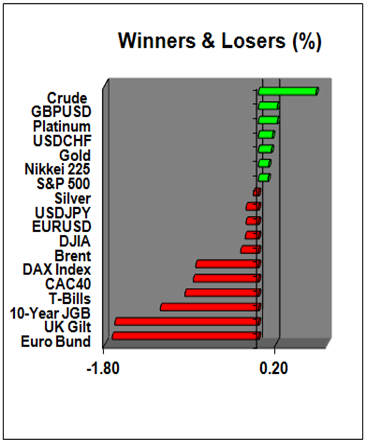 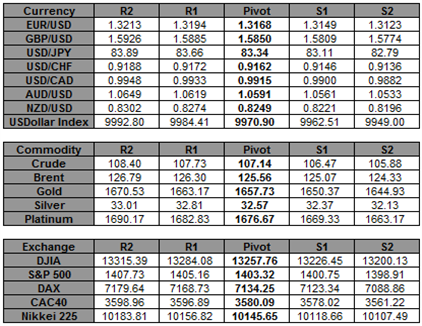